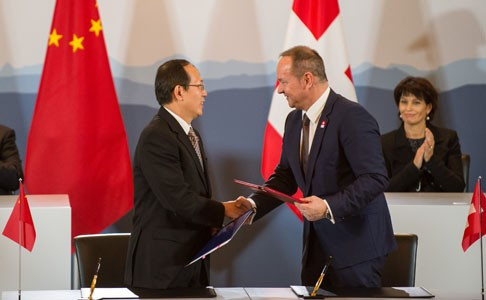 A deal of "strategic cooperation" has been agreed between the Chinese National Olympic Committee and Swiss Olympic.

Chinese head Gou Zhongwen signed a Memorandum of Understanding with his Swiss counterpart Jürg Stahl to usher in the new partnership.

The two leaders of both countries, Swiss President Doris Leuthard and Chinese counterpart Xi Jinping, with the latter currently on a state visit which has seen him meet International Olympic Committee (IOC) President Thomas Bach.

Both countries are currently preparing to hold major winter events, with Switzerland staging the 2020 edition of the Winter Youth Olympic Games in Lausanne.

China's capital Beijing will then host the Winter Olympic Games in 2022.

Switzerland are also currently preparing a bid for the 2026 Winter Games, with two projects from the European country currently in the frame for their candidacy.

The new partnership will include consultation between both countries on subjects such as sports venues, training facilities and the organisation of major events.

China, which hopes to encourage more of its citizens to engage with winter sport before Beijing 2022, is hoping to benefit from a transfer of knowledge from Switzerland which is an established snow and ice power.

A benefit for Switzerland could be a boost in tourism from Chinese visitors.