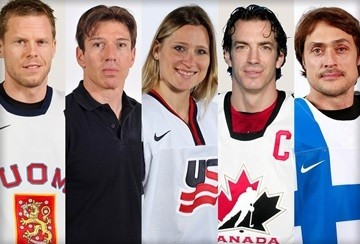 Olympic gold medallist Angela Ruggiero of the United States has been named as one of the latest inductees into the International Ice Hockey Federation (IIHF) Hall of Fame.

The 2017 IIHF Hall of Fame induction ceremony is due to be held in Cologne on May 21, the final day of the World Championship, co-hosted by France and Germany.

Ruggiero, who was part of the gold medal winning American team at the 1998 Games in Nagano, is the chair of the International Olympic Committee (IOC) Athletes’ Commission.

The 37-year-old also won two Olympic silver medals and one bronze during her time on the ice before she embarked on a career in administration with the IOC.

Koivu is considered one of Finland’s greatest-ever ice hockey players and claimed three bronze and one silver at the Olympic Games.

His crowning moment came when he helped Finland win the 1995 IIHF World Championship with a 4-1 victory over hosts Sweden in the final.

Krupp became the first German competitor to win the National Hockey League (NHL) Stanley Cup in 1996 as he scored the crucial goal in Colorado Avalanche’s victory against the Florida Panthers.

The 51-year-old also represented his country at the 1998 Olympics before going on to coach the senior team.

Canadian star Sakic helped his country secure gold at the 2002 Games in Salt Lake City, where he was voted as the tournament’s most valuable player, and also clinched the world title in 1994.

Selanne also has four Olympic medals to his name having been part of the Finnish teams which finished third in 1998, 2010 and 2014.

He also won silver at Vancouver 2010.

Selanne broke into the NHL in 1992 and scored 76 goals, a record for a rookie, while he remains the top-scoring Finn ever to play in ice hockey’s most famous league.

Former Great Britain national team player and coach Tony Hand has been selected to receive the Richard “Bibi” Torriani Award, while French ice hockey executive and former player and coach Patrick Francheterre will be given the Paul Loicq Award.