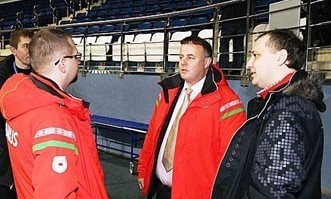 Venues due to host events at the second European Games in Minsk in 2019 have been given the all-clear by Pierce O'Callaghan, the European Olympic Committees' (EOC) senior sports consultant.

O'Callaghan visited the capital of Belarus for three days and has provided positive feedback.

The Irish consultant, director of sport at the inaugural European Games in Baku in 2015, visited the main sites to be used during the competition in two-and-a-half years time.

These included the rowing channel in Zaslavl, the Minsk Arena and the Sports Palace.

"I can state with full responsibility that the Minsk sports facilities are 100 per cent ready to host the second European Games," said O'Callaghan.

"During the visit, I was able to visit a few hotels of a high category.

"These facilities meet all the requirements for receiving guests while the student village meets all the conditions for competitors to live."

O'Callaghan was joined on the tour by Maksim Ryzhenkov, first vice-president of the Belarus National Olympic Committee, and the governing body's secretary general Anatol Kotau.

Belarus President Alexander Lukashenko made the commitment to step in as host following a meeting with Janez Kocijančič, the acting President of the EOC.

The process to decide what sports feature on the programme at Minsk 2019 will begin to be decided at the next EOC Executive Board meeting, due to take place on January 26 in Lausanne.

There were 20 sports at Baku 2015 but there are expected to be fewer in Minsk.

European Athletics have announced they have agreed to be part of the Games with an "innovative event" set to feature.

Doubts arose whether athletics would be involved but it has been confirmed it will now take place with more details on the format set to be revealed in April.

Ryzhenkov said at the start of December that preference will be given to sports which offer qualification for the 2020 Olympic Games in Tokyo.

Kocijančič is currently serving as President of the EOC following the arrest of Irishman Patrick Hickey at Rio 2016.

He was detained following a dawn raid and denies ticketing charges which have been made against him.

Hickey, who stepped down from his sporting roles amid the saga, is now back in Ireland after the Association of National Olympic Committees agreed to loan him his bail money.

Brazilian authorities allowed him to return to receive medical treatment.

Kocijančič has endured a tricky opening to his tenure, with the decision to award Minsk the Games criticised by human rights groups.

The Sports and Rights Alliance have claimed that Belarus "fails to meet basic human rights standards including on the right to protest, discrimination, press freedom and workers’ rights".