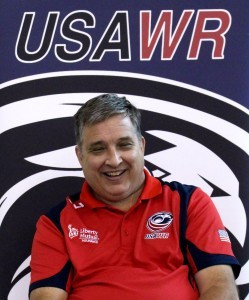 James Gumbert will continue as the head coach of the United States wheelchair rugby programme for 2017.

The decision was announced by the Lakeshore Foundation, the High Performance Management Organisation (HPMO) for the national governing body.

Gumbert, in his 11th year as the head coach, will be joined by Sue Tucker who has also been chosen to return to the programme for a fifth year.

Assistant coach Andy Cohn and strength and conditioning coach Steve Pate both decided not to be considered for coaching positions moving forward.

US wheelchair rugby began their 2017 season with a national team selection camp which started earlier this week on January 5 and is due to conclude tomorrow at the Lakeshore Foundation in Birmingham in Alabama.

It was revealed earlier this week that a total of 26 athletes were granted places at the camp.

They will then decide which 16 competitors will train and compete leading up to this year’s Americas Championship, scheduled to be held in July and August at a venue which has not yet been confirmed.

A number of the athletes attending the camp in Alabama represented the United States at the Paralympic Games in Rio de Janeiro in September, where they took home the silver medal.

The top two teams at the Americas Championship tournament will automatically qualify for the 2018 International Wheelchair Rugby Federation (IWRF) World Championships at the Sydney Olympic Park in Australia.

The sport’s flagship quadrennial competition outside of the Paralympic Games will involve 12 of the world’s best teams and is due to be staged from August 4 to 10 next year.