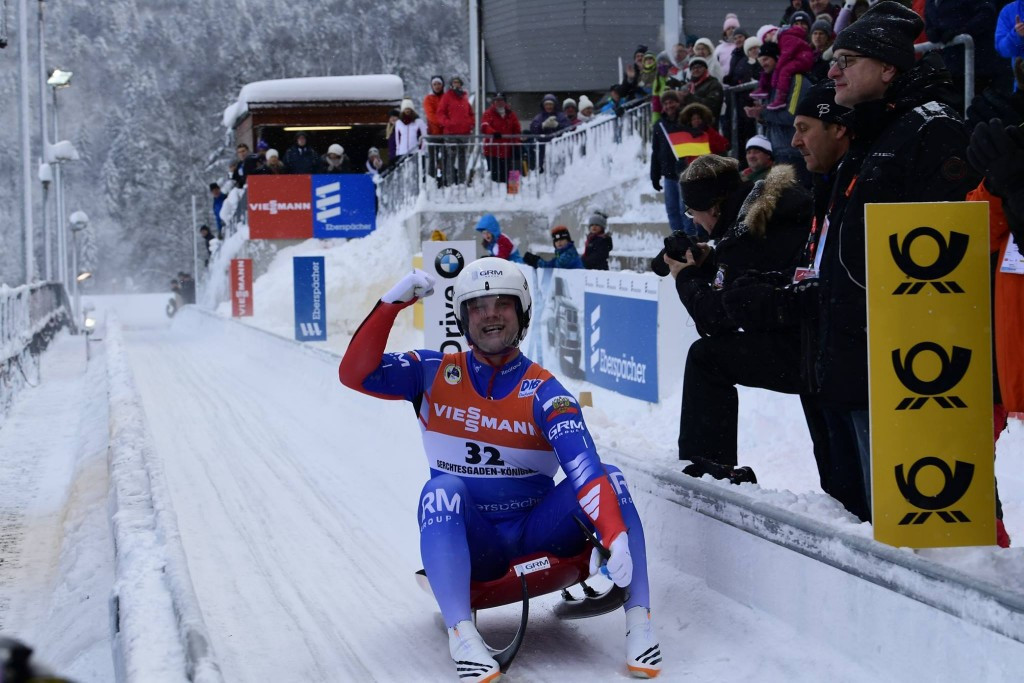 The 25-year-old was fastest on both runs and clocked a combined time of 1 min 38.363sec to finish ahead of home favourite Ralf Palik, 0.248sec behind in the runners-up spot, and Austria’s Wolfgang Kindl, 0.460 back in third.

"Before the start, a spectator told me that this was my kind of weather and it would be a good day for me," Pavlichenko, the 2015 world and European champion, said.

Germany’s Felix Loch, who clinched his fifth World Championship title in Königssee last year, had to settle for fourth and is still waiting for his first World Cup win of the season.

Pavlichenko was the first non-German to win a title in Königssee following yesterday’s wins for Natalie Geisenberger in the women’s singles and Tobias Wendl and Tobias Arlt in the doubles.

However, Germany returned to the top of the podium in the team relay event.

The quartet of Geisenberger, Palik, Wendl and Arlt posted a time of 2:42.348 to successfully defend their continental crown.

Kindl teamed up with Miriam Kastlunger, Thomas Steu and Lorenz Koller as Austria finished in the runners-up spot, 1.269 off the pace.

Rounding out the podium was Latvia’s Eliza Cauce, Arturs Darznieks, Andris Sics and Juris Sics, 1.638 back.

Despite coming fourth today, Canada lead the World Cup overall standings on 160 points with the US second on 155 and Germany third on 146.

A record 15 teams took part in the competition just one day before the team relay celebrates its 10th anniversary.

The next leg of the World Cup season is due to be held on the artificial ice track in the Latvian town of Sigulda from January 14 to 15.

In addition to the men’s, women’s, doubles and team relay Olympic disciplines, the three Sprint World Cup races are also on the agenda.

The event begins less than two weeks before the start of the FIL World Championships in Austrian city Innsbruck, where action is due to take place from January 26 to 29.