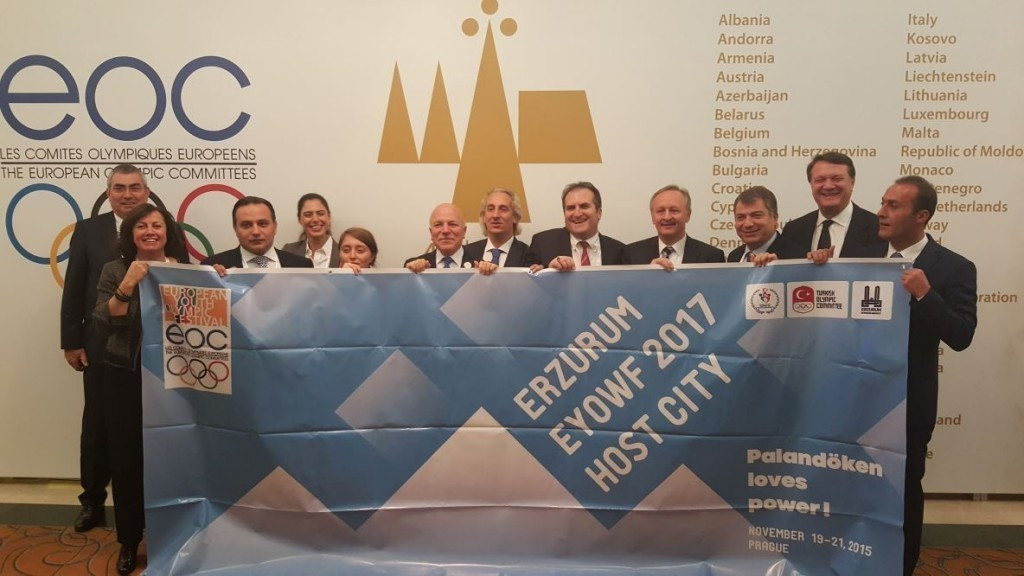 A final decision on whether Erzurum will remain as the host of next month's Winter European Youth Olympic Festival (EYOF) in light of the current security fears in Turkey will be made during an Executive Committee meeting of the European Olympic Committees (EOC) in Lausanne on January 26, insidethegames has been told.

In a statement, the EOC confirmed they were "monitoring the situation to ensure we can closely follow all developments".

The decision will come as a result of consultation with the Turkish Olympic Committee and the Organising Committee for the event, due to run from February 11 to 18.

Last year the country was hit by several terrorist attacks and a gunman shot dead 39 people at the Reina nightclub in Istanbul in the early hours of Sunday (January 1) morning.

The Islamic State (IS) has claimed responsibility for the incident.

It came after a car bomb exploded in December in the city of Kayseri, located around 640 kilometres west of Erzurum, killing 13 people, mostly soldiers, and injuring 50.

IS were blamed for a further four attacks in Turkey in 2016, including a bomb and gun attack on the Ataturk Airport in Istanbul in June, where 41 people lost their lives.

It is thought this is due to the military operation was launched by Turkish forces in August, aimed at pushing back IS, who have accused the nation of "shedding the blood of Muslims" through its "air strikes and mortar attacks" in Syria.

“The EOC is supporting the activity of the Organising Committee of the European Youth Olympic Festival in Erzurum and we are monitoring the situation to ensure we can closely follow all developments,” the EOC said in a statement sent to insidethegames.

"The safety of the young athletes participating in the forthcoming event is our first priority.

"After consultation with the Turkish Olympic Committee and the Erzurum 2017 Organising Committee, the EOC Executive Committee will make a final evaluation in its meeting in Lausanne on January 26th, 2017."

The British Olympic Association (BOA) claimed their preparations for the Winter EYOF, which is set to attract more than 1,500 athletes between the ages of 14 and 18, continue despite the security fears.

The organisation claimed they were “confident the Turkish authorities, the EOC and Organising Committee will continually assess the security measures that are in place to make certain the environment is as safe as possible”.

"The British Olympic Association has no higher priority than the safety and security of all of our travelling delegations," the BOA said in a statement sent to insidethegames.

"This is the case for every Games in which we participate - Summer, Winter, Continental and Youth.

"We are monitoring the situation closely and remain in regular communication with the Foreign and Commonwealth Office and other relevant bodies."

World Curling last year opted to move their World Junior Championships from Erzurum amid mounting terrorism fears in the country.

The event, which took place from March 5 to 13, was re-allocated to Copenhagen.

Erzurum had initially been due to host the 2019 Winter EYOF but swapped with Sarajevo and East Sarajevo at the EOC General Assembly in Prague in November 2015.

This was because Bosnian organisers admitted they were struggling to get ready in time.

Sarajevo and East Sarajevo had been awarded the 2017 Winter EYOF at the 2013 General Assembly in Rome, while Erzurum had won their bid at the 2014 meeting in Baku.

Erzurum already have many of the facilities in place after hosting the 2011 Winter Universiade, when 1,800 athletes from more than 50 countries competed.

The Erzurum 2017 Winter EYOF, a multi-sport event, will be the 13th winter edition and the competition also has a summer version.

The 2015 Winter Festival was held in Vorarlberg, in Austria and Vaduz in Liechtenstein, the first time countries had co-hosted the event.