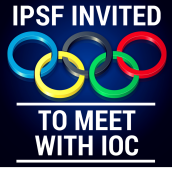 The IPSF confirmed they would get together with officials to talk over pole sports’ prospects of becoming an IOC-recognised sport in the future.

The meeting in January “signifies a legitimate advancement of IOC Recognition for the IPSF”, the sport’s worldwide governing body said.

“The pole community applauds and eagerly anticipates the outcome of this historic encounter when the IPSF puts pole sports squarely in the room with the IOC,” an IPSF statement added.

The governing body missed out on achieving the status this month, with the IOC Executive Board provisionally recognising muay thai and cheerleading.

It followed applications from 16 International Federations (IFs), with pole sports among those to have submitted a bid.

Despite being overlooked, the IPSF were praised by the IOC for their “comprehensive application as part of the 2016 IOC recognition procedure”.

The IOC told the IPSF that it was “clear that a great deal of time and effort has been spent in preparing the application”.

“We could not be more thrilled with this response and look forward to the meeting in January,” IPSF President Katie Coates said.

“We realise that the IOC is a vast establishment and the recognition process is rigorous and lengthy to say the least, and we are honoured to be invited.

“We look forward to the continued growth of Pole Sports as a whole during these challenging and engaging next steps.”

The IPSF confirmed they had submitted an application for IOC recognition in October, which they said was the “beginning of a long process we are proud to be ready for” while claiming they are “rapidly evolving” to meet the eligibility criteria.

They had been working on their submission for the last seven months, with the process being led by the IPSF Olympic Sub-Committee, comprised of Kate Whitley, Kriston Leagh, Lies Cuisinier, Bianca Scholten, Maria Alexandra Hernandez and Jimena Barrios.

Their efforts were given a boost after they were officially confirmed as a signatory of the World Anti-Doping Agency Code.

The IPSF was turned down for membership of umbrella organisation SportAccord earlier this year.