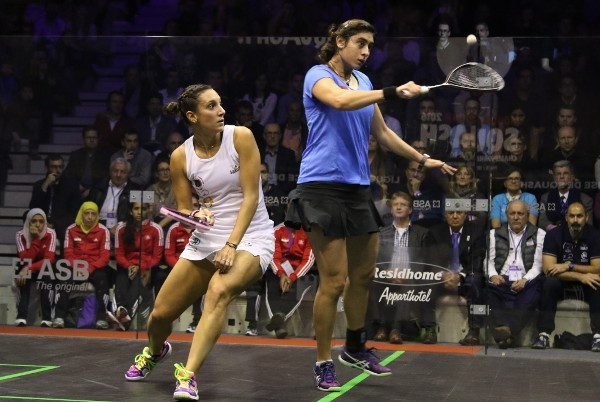 It was the most established players who led the way for both teams.

World number one Nour El Sherbini took on fifth ranked Camille Serme in the opening rubber of the Egypt and France clash.

The two have enjoyed six wins apiece in previous clashes, but Serme won their last encounter in the final of this year's US Open.

It proved the Egyptian's turn this time, however, as she recovered from 7-3 down in the second game to win 3-0 in 41 minutes.

"We might have the top three players in the world, but when you're playing the host nation, anything can happen," said winning coach Amr Shabana.

"The scoresheet won't do the first game justice - it could easily have been 3-0 to France.

"The trouble with being top seeds is that everybody expects you to win - it's that or nothing!

"We have to remember that England and Australia have won this title many more times than Egypt - so to really have something to celebrate we need to win it eight or nine more times and get past everybody."

Egypt are two-time former winners of the biennial event in 2008 and 2012 in comparison with six English and seven Australian successes.

World number four Laura Massaro came from a game down to beat 12th-ranked left-hander Annie Au in the first rubber.

Like in the first semi-final, a hard fought opening victory proved key as Sarah-Jane Perry then cruised past Liu Tsz-Ling 3-0.

England will now play in their 12th final in a row as they seek a record-equalling seventh victory.

There will be no third place playoff so France and Hong Kong will each take bronze.