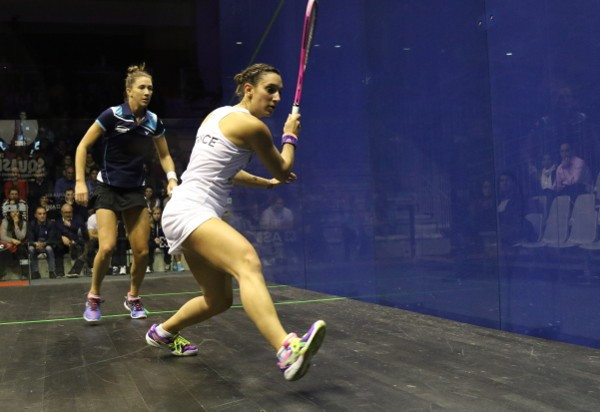 France made history at the World Squash Federation (WSF) Women's World Team Squash Championship in Paris today by beating Australia to join Egypt, Hong Kong and England in the semi-finals.

It marked the first time they have ever reached the last-four of the global event.

The hosts, who had already upset the seeding by beating Hong Kong to top their pool, were ranked fifth to Australia's sixth in their quarter-final match-up at the Palais Des Sports Robert Charpentier.

Australia's far greater history in the sport made them the favourites, nonetheless, although an exuberant partisan crowd always seemed likely to narrow the gap.

It was the crowd that proved vital as Coline Aumard shocked former world number one Racheal Grinham 3-1 in the opening tie.

French number one Camille Serme then sealed the win with a 3-0 victory over Donna Urquhart before Laura Pomportes completed the job by overcoming Tamika Saxby, 2-0.

"I have been working with some of these players for around 20 years, so to achieve this - in Paris - is amazing," said team coach Philippe Signoret.

"I am very pleased for the team. I guess this is the best moment of my career."

France will have the tough task of facing number one seeds Egypt for a place in the final after they favourites enjoyed a straightforward 3-0 success over United States.

There was another shock in the other half of the draw as fourth seeds Hong Kong won 2-1 against third-ranked Malaysia.

Joey Chan put Hong Kong ahead with a 3-2 win over Delia Arnold in a 57 minute thriller.

But, in another 56 minute epic, Tong Tsz-Wing then edged Sivasangari Subramaniam 3-1 to secure the win.

Defending champions England avoided any upsets with a comfortable 3-0 success over New Zealand in the final tie.

England will face Hong Kong in the second semi-final.