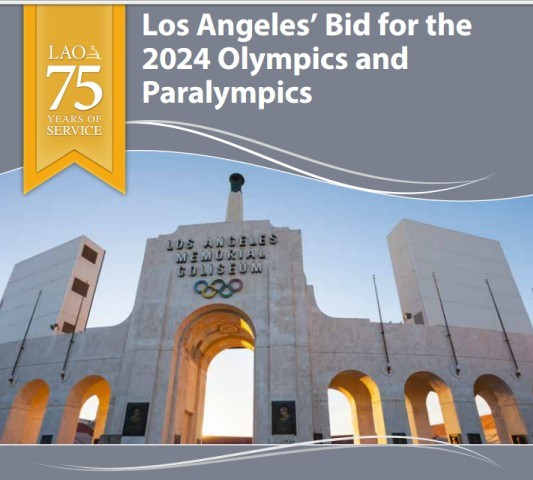 The California Legislative Analyst Office (LAO) has released a detailed report which backs the Los Angeles 2024 Olympic and Paralympic Games bid as a "low-risk and fiscally responsible" plan.

The LAO noted the "economic viability" of the LA 2024 plan, with every venue either existing, temporary or planned and funded by private investors with no "incremental capital expenditure".

This approach ties in with the International Olympic Committee's (IOC) Olympic Agenda 2020 reforms, it is claimed, that encourage bid cities to propose economically viable and sustainable Games that will still leave a legacy for the next generation.

"In recent years, several major cities have chosen not to bid for the Olympics, fearing massive sports venue and infrastructure cost overruns that have plagued prior host cities," the report said.

"Los Angeles’ 2024 bid benefits from this low–cost, low–risk approach, as all of its planned venues already exist or are on track to exist by 2024.

"Compared to many past Olympic bids, the current proposal by the LA 2024 organising group is a relatively low risk one."

The report also recommended, however, that the State of California should "provide some oversight related to the Games in addition to the much more intensive oversight expected to be provided by the Los Angeles City Council and the Mayor".

In addition, suggestions were made to appoint oversight committees "to oversee the Governor’s negotiations, to hear of issues that develop in the planning of the Games, and to prod state departments, if needed, to help Games organisers".

The report follows State legislation enacted in September that will provide up to $250 million (£198 million/ €230 million) in state financial support for Los Angeles 2024.

Los Angeles 2024 has promised that their Games will be a privately funded affair and that the tax payer will not have to contribute.

The report suggests this may not be the case, however, and that public money my be required due to the size of the costs attached.

"There is some chance that city and State taxpayers could be called onto provide additional funds," the LAO believe.

"Many Olympics have experienced large venue or infrastructure cost overruns and delays, and some have had disappointing ticket sales.

"While a Games plan can try to minimise financial risks, there is probably no way to completely eliminate these risks."

It means new railway lines and bus services will be introduced, as well as highway improvements in the Californian city.

Los Angeles 2024 chairman Casey Wasserman responded to the LAO report, said: "After conducting a thorough and independent review of LA 2024, we appreciate the LAO's confidence in our low risk and fiscally responsible Games plan.

"LA 2024 has developed a strong partnership with the California Governor, legislature and state agencies and look forward to working closely with them to deliver our innovative, creative and sustainable 'new Games for a new era' in 2024."

Two other candidates will battle Los Angeles for the right to host the Olympics and Paralympics in eight years’ time - Budapest and Paris.

The IOCis due to elect the host city for 2024 at its Session in Lima on September 13 next year.

To read a full copy of the report click here.