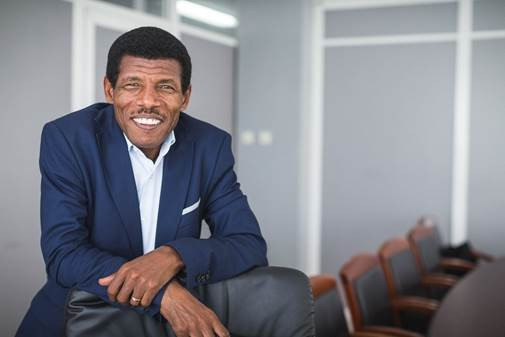 Double Olympic champion Haile Gebrselassie has succeeded in his aim of becoming President of the Ethiopian Athletics Federation (EAF) following an election in Addis Ababa.

"I am very honoured that they trust me in this position," said the 43-year-old former long distance and marathon legend, among around 100 people who descended on the EAF offices five months ago to protest about a number of issues including the Federation’s Rio 2016 selection policy.

"I am looking forward to working together with all people involved in the EAF to work on a great future for Ethiopian athletics."

Gebrselassie was reported to have gained nine of the 15 available votes.

Before the election Gebrselassie, winner of Olympic gold medals in the 10,000 metres at Atlanta 1996 and Sydney 2000, said he was "looking forward to use this experience and work together with all the people involved in EAF".

The organisation had been chaired by long-serving female sports administrator Bisrat Gashawtena, whose deputy was Nega Gebre-Egziabher.

I feel so honoured to be elected president of the Ethiopian Athletics Federation! Will work on a great future for Ethiopian athletics!

Gebrselassie said he hoped "to bring Ethiopian athletics to a higher level".

The eight-time world champion added: "Athletics changed my life completely and I am thankful for that.

"I have gained a lot of experience throughout my athletics career and now it is time to give back to my country and sport."

The EAF came under intense scrutiny after they controversially decided to omit Kenenisa Bekele, world record holder in the 5,000m and 10,000m events, from their marathon team for this year’s Olympics Games in Rio de Janeiro.

Ethiopia has also faced suspicion about its anti-doping programmes after it was one of five countries put on a special monitoring list by the International Association of Athletics Federations in March.

Gebrselassie said he could not understand the decision not to take one of Ethiopia’s best distance runners to the Games.

"As you know Kenenisa is a well-experienced athlete," he told the African News Agency.

Bekele, 34, a three-time Olympic champion, described his omission from the Rio 2016 team for not having run enough big races in the previous year as "unjust" and criticised the EAF for their "biased" selection criteria

"The Federation set a criteria they knew very well would rule me out," he added.

"I finished third in the London Marathon when I was far from 100 per cent fit.

"I’d done my preparation in full.

"Everyone knows that London is the toughest marathon except the people from the Federation.

"There is a group there that know nothing about athletics.

"According to their criteria I’m only seventh in the selection list.

"That they did not consider what I have done for Ethiopian athletics is one thing, but the problem is that they have not considered that my performances have been no worse than those who have been selected."

Bekele won the Berlin Marathon on September 25 in 2 hours 03min 03sec, the second fastest time ever run that was eligible for record purposes.