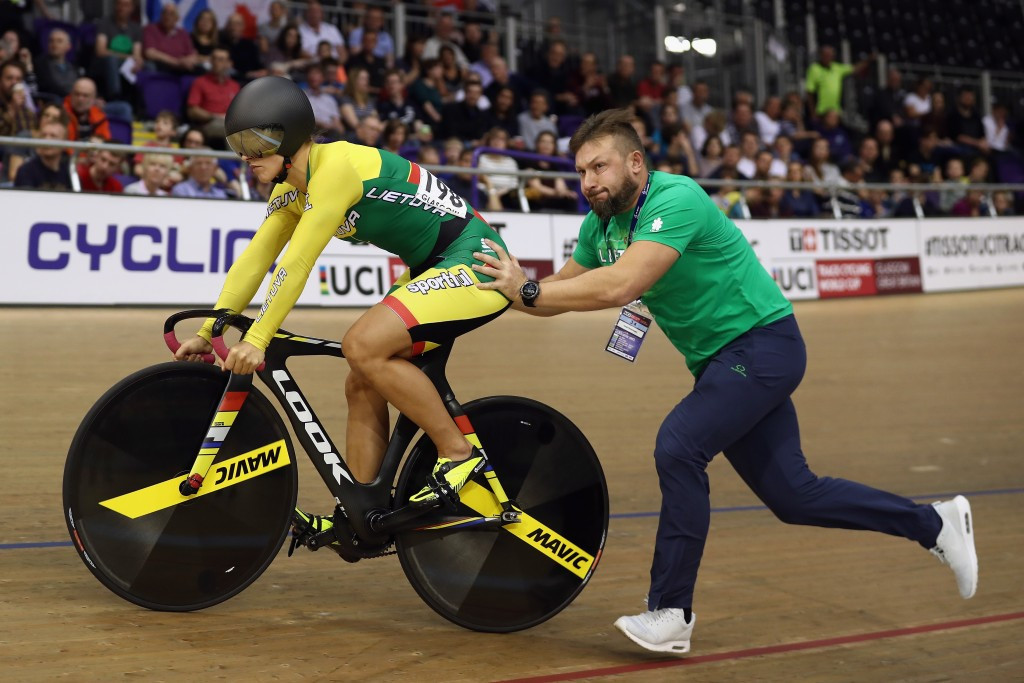 Lithuania’s Simona Krupeckaite completed the sprint double on the second day of the International Cycling Union (UCI) Track World Cup in Glasgow, where the women’s madison made its first ever appearance at world level.

Krupeckaitė, fresh from her keirin victory last night and double gold at the European Championships, eased through the rounds of the women’s individual sprint to face Luibov Basova of Ukraine at the Sir Chris Hoy Velodrome.

The 33-year-old would defeat her rival in straight rides to add to her success yesterday.

Bronze was earned by Spain’s Tania Calvo Barbero after she overcame Belgium’s Nicky Degrendele, whom she had beaten at the same stage at last month’s European Championships.

The women’s madison got off to a difficult start at World Cup level with a series of crashes punctuating the opening stages of the event, which included home favourites Katie Archibald and Manon Lloyd coming to grief.

After picking themselves up the pair earned three straight sprint victories to propel themselves into medal contention, with Olympic team pursuit gold medallist Archibald producing a superb display.

The British duo were eventually able to claim the gold with 25 points, after winning the final sprint, with France and Russia completing the podium places on 23 and 13 respectively.

Poland’s Justyna Kaczkowska rode to gold in the individual pursuit, the final women’s event of the day, after the 19-year-old delivered an accomplished display in the final.

Kaczkowska, who earned a silver medal at the European Championships, clocked 3min 31.456sec to finish three seconds clear of her rival Elise Delzenne of France.

The experienced Belarusian Tatsiana Sharakova earned bronze in a time of 3:36.271, defeating British youngster Emily Nelson in the process.

A superb performance saw Australia’s Cameron Meyer dominate the race from start to finish as he ended on 81 points, with France’s Benjamin Thomas ending some way adrift in second on 44.

The home crowd were able to celebrate Mark Stewart clinching bronze as he ended on 29 points.

The podium of the men’s scratch race was effectively decided when three riders were able to gain a lap over the rest of the field, leaving the final sprint to settle which colour medal the trio would ride away with.

Belgium’s Robbe Ghys would ultimately end up with top honours after successfully sprinting to gold, with Maksim Piskunov of Russia and Portugal’s Ivo Oliveira earning silver and bronze respectively in the bunch race.

Gold in the men’s keirin event was earned by Tomas Babek of the Czech Republic as he edged ahead of Lithuania’s Vasilijus Lendel and Britain’s Lewis Oliva, who earned silver and bronze respectively.

Action in Glasgow is due to draw to a close tomorrow.