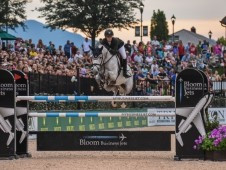 The International Equestrian Federation (FEI) has awarded the 2018 World Equestrian Games to the American town of Tryon in the wake of Canadian city Bromont being axed as hosts due to financial issues.

The FEI Bureau today unanimously agreed that the Games should be awarded to Tryon, meaning that the world governing body’s flagship event remains in North America.

Action is due to take place at the Tryon International Equestrian Center from September 10 to 23.

The dates are different to those originally chosen, August 12 to 26, and have been changed following two scientific studies commissioned by the FEI which stated that climatic conditions would be significantly more favourable in North Carolina during September, particularly from a horse welfare perspective.

The FEI says it also looked at date clashes with other fixtures on the FEI calendar to ensure what it describes as the optimum timeslot for the Games.

"We are very pleased to announce Tryon as the host of the FEI World Equestrian Games 2018," FEI President Ingmar de Vos said.

"The Tryon team submitted a really impressive bid and we have every confidence in the Organising Committee.

"It’s a truly spectacular venue and almost all the necessary infrastructure for our eight disciplines is already in place.

"We are looking forward to a fantastic celebration of top level sport as all the disciplines come together to crown their world champions at the Games in two years' time."

Created by Mark Bellissimo, the Tryon International Equestrian Center is situated on a 1,600 acre site at the foothills of the Blue Ridge Mountains.

The venue has 1,200 permanent stables and 12 arenas, including a floodlit international arena with a potential spectator seating capacity of up to 12,000 and VIP seating for up to 1,500.

It also has a covered arena with 5,000 seats and a "world class" cross-country course that will be used for both eventing and driving.

An on-site state-of-the-art veterinary facility is currently under construction at the venue, which is surrounded by hundreds of miles of equestrian trails for endurance.

"We are thrilled with this news and thank the FEI Bureau for having faith in us and entrusting us with the honour of hosting this prestigious event," Bellissimo said.

"It’s a really great fit for the Carolinas' Equestrian heritage and we look forward to working closely with the FEI and with the United States Equestrian Federation to produce a fabulous FEI World Equestrian Games in 2018."

A lack of secure funding for Bromont's hosting of the Games led to a mutual agreement between the FEI and the Canadian Organising Committee of the 2018 World Equestrian Games (COJEM) to terminate the host contract in July of this year.

Concerns over the financing of the event saw Bromont 2018 chief executive Luc Fournier, chairman François Duffar and Board members Julie Payette, René Perreault and Linda Heathcott all resign in May.

Richard Mongeau, general manager of the non-profit organisation Cheval Québec, which supported Bromont’s bid for the Games, admitted they were "very concerned" following the resignations and claimed the event could be cancelled if a solution could not be found.

That eventuality came to pass, with the Canadian Federal Government telling organisers they would not be providing funding to help stage the Games.

Following the withdrawal of Bromont, the FEI Bureau mandated De Vos to find a solution.

After an assessment of a number of options, he proposed that the Bureau allocate the Games to Tryon.

In light of the timeframe, with the Games in less than two years, the FEI says existing infrastructure was a crucial factor in the evaluation process.

"The FEI is 100 per cent committed to the FEI World Equestrian Games concept and we are extremely grateful to all those that showed interest in hosting the 2018 Games," De Vos added.

"Their enthusiasm demonstrates the importance of the event across the equestrian community."