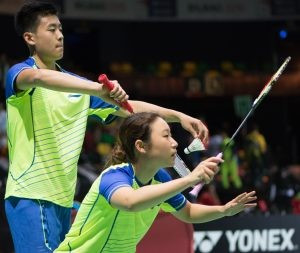 Australia edged Scotland in a dramatic encounter today as action got underway at the Badminton World Federation (BWF) World Junior Mixed Team Championships at the Bilbao Arena in Spain.

Playing in the opening round of the tournament, Australia took the lead thanks to mixed doubles duo Huaidong Tang and Janet Son, who beat Matthew Grimley and Eleanor O’Donnell 21-15, 15-21, 21-17.

The Scots quickly levelled proceedings, however, with Alexander Dunn brushing aside Kai Chen Teoh in men’s singles by virtue of a 21-9, 21-11 win.

Joy Lai put Australia back in front with a 21-10, 21-14 women’s singles victory over Toni Woods before Grimley made a triumphant return with his twin, Christopher, in men’s doubles.

It, therefore, came down to the women’s doubles clash to determine the winner as Lai and Tiffany Ho prevailed 21-12, 21-18 over O’Donnell and Ciara Torrance to ensure Australia took the tie 3-2 overall.

Top seeds China cruised to a 5-0 victory over Canada.

There were also equally emphatic wins for Japan against New Zealand, South Korea against Sri Lanka, Indonesia against Norway, Chinese Taipei against Hungary and Moldova, India against The Netherlands, and Malaysia against Mexico.

Russia, who are in Group B2 along with Chinese Taipei, also began well by beating European rivals Hungary and Moldova without reply.

"We have some strong players in men’s doubles and mixed doubles but we have to wait and see how well we can do against Chinese Taipei," said coach Nikolay Nikolaenko.

"We didn’t play last year in Peru and this year we have new players, so it’s a big challenge."

The team event is scheduled to conclude on Sunday (November 6) after which the individual event takes centre stage from November 8 to 13.

"It’s been a big challenge for us and we are ready," he said.

"We are hoping many people will come to watch this event and see some of the best young players in the world.

"Every morning we are inviting schoolchildren to come and watch.

"We want to use the world juniors to promote badminton in this region."