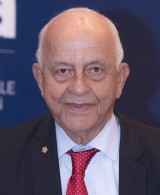 An "immediate request" has been made by the International Swimming Federation (FINA) to the Brazilian Aquatic Sports Confederation (CBDA) for information about the removal of the body's President Coaracy Nunes as part of a corruption investigation.

A decision will not be made over whether or not Nunes will be suspended or removed from his secondary position as a member of FINA's ruling Bureau until they have received a response.

They will also await the completion of Brazilian justice procedures.

Nunes was removed as President of the National Federation late last month as part of an investigation into corruption and fraud.

Police also believe that one of the companies that they have done business with, Natação Comércio de Artigos Esportivos Ltda, is actually a front company used to illegally divert public money.

The world governing body said yesterday that they had "no comment" to make about whether they would begin disciplinary proceedings.

They, however, now appear to be taking the matter more seriously following several press reports about Nunes.

"FINA has noted the media reports regarding Coaracy Nunes, President of the CBDA," a spokesperson told insidethegames today.

"FINA has made an immediate request for further information from the CBDA so that we can review the matter fully and no further comment will be made until the Brazilian justice procedure has been completed."

Four of his allies, including former vice-president Luiz Soares have also been ordered to be removed from office as part of the probe, Globo has reported.

It is not, therefore, clear exactly who FINA plan to contact within the CBDA.

Nunes denies all allegations and has claimed he is victim of a campaign by rivals planning to replace him as President.

Lawyers representing the body also claim he was not given a proper right to defence before the verdict was announced.

Other allegations against the 78-year-old, a longstanding FINA Bureau member, President of the CBDA since 1988, include that funds designated to buy airline tickets and equipment for the Brazilian Olympic team have been misused.

This appears a clear violation of the FINA Code of Ethics which all serving officials supposedly have to fulfil.

Section D on Integrity stipulates that "no official shall, directly or indirectly, solicit, accept or offer any concealed remuneration, commission, benefit or service of any nature connected with their participation in aquatics or with their function as an official".

It adds: "No official may be involved with any company, association, firm or person whose activity is inconsistent with the objectives or interests of FINA.

"If it is unclear, whether this kind of a connection exists in any given situation, the matter shall be submitted to the Ethics Panel for a decision."