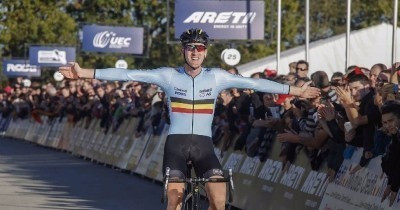 The battle for victory in the men’s event had been expected to be between Dutch rider Mathieu van der Poel and reigning world champion Wout van Aert of Belgium.

Van der Poel was one of the riders to attack in the early stages of 31 kilometres race held over 12 laps.

The key move came inside the final five laps, with Aerts moving clear of the main group of contenders.

Aerts continued to move away in the closing stages to complete a solo victory, the 23-year-old finishing in a time of 1 hour 04 min 16sec.

The silver medal was earned by Van Der Poel, the Dutchman winning the sprint from the chasing pack, who ended 45 seconds behind.

The women’s elite race went according to plan for the world champion De Jong as she broke clear of her main rivals with three laps left.

The 22-year-old crossed the finishing line along in a time of 43:14, with her compatriot Licinda Brand and Caroline Mani of France completing the podium after ending 17 seconds down.

Belgium’s Quinten Hermans defended his men’s under-23 title in a sprint finish, with Chiara Teocchi of Italy earning the women’s event.