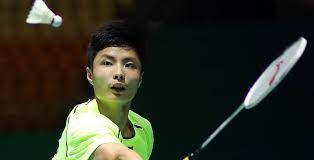 Third seed Jan Ø. Jørgensen of Denmark suffered no such problems in a 22-10, 21-15 victory over Anthony Si of Singapore.

Ng Ka Long, the eighth-seed from Hong Kong, was another winner.

The tournament in the French capital has been rocked by injury-withdrawals after Spain's women's singles Olympic champion Carolina Marin and Malaysia's men's silver medal winner Lee Chong Wei were among those to pull-out.

Danish second seeds Mathias Boe and Carsten Mogensen continued a good day for Denmark with victory in the men's doubles.

Action at the Super Series tournament in the French capital, a candidate city for the 2024 Olympic and Paralympic Games, continues tomorrow.