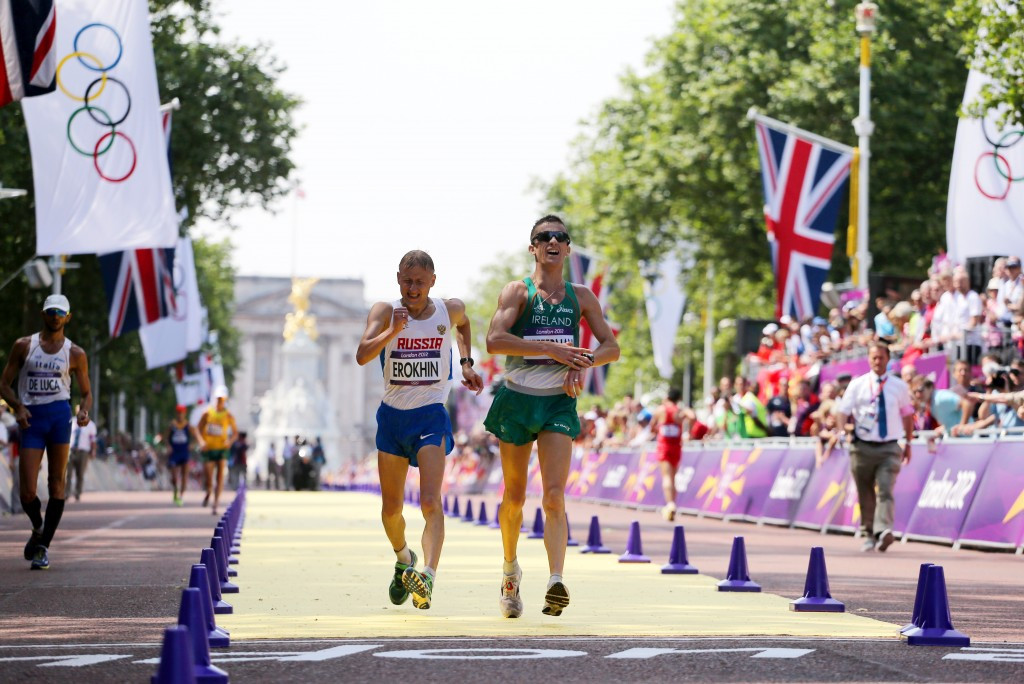 An Olympic medal will be officially presented in Ireland for the first time next month when Robert Heffernan belatedly receives a 50 kilometres race walking bronze from London 2012.

Heffernan initially finished fourth in a national record 3hours 37min 54sec in the British capital only to be promoted due to Russian winner Sergey Kirdyapkin being disqualified for doping.

Si Tianfeng of China has been promoted from third to second place.

Heffernan also won the world 50km title at the 2013 World Championships in Moscow as well as a 20km European bronze in 2010.

My Dream is finally becoming a reality . I am really looking forward to celebrating this with the Irish public 🎖 https://t.co/UKflJcG1bh

The 38-year-old is set to finally receive his Olympic medal at an event in Cork City Hall on November 3 at 7pm.

"This is always what I dreamt about, being presented with an Olympic medal," he said.

"It would of course have been wonderful to have received it in London but now to receive it on Irish soil in my home city of Cork, with my own family, friends, supporters on the 100 year anniversary of 1916 [date of Irish independence], is a fitting and very special way for Irish people to celebrate Irish Olympic sporting success."

Heffernan's medal is set to be presented by Willie O’Brien, acting President of the Olympic Council of Ireland.

"It is the first time an Olympic medal will be presented on Irish soil," O'Brien said.

"It will be a very proud occasion of the Olympic movement in Ireland, Athletics Ireland, and of course for Rob, his family, friends, and supporters."

Admissions will be open to ticket-holders only, with more information on how to apply available here.

Kirdyapkin was initially banned for three years and two months in January 2015 for irregularities in his biological passports, with his sanction back-dated to October 2012.

That allowed him to cling on to his Olympic title, won in August, but the Court of Arbitration for Sport then disqualified his results from August 20, 2009 to October 15, 2012.