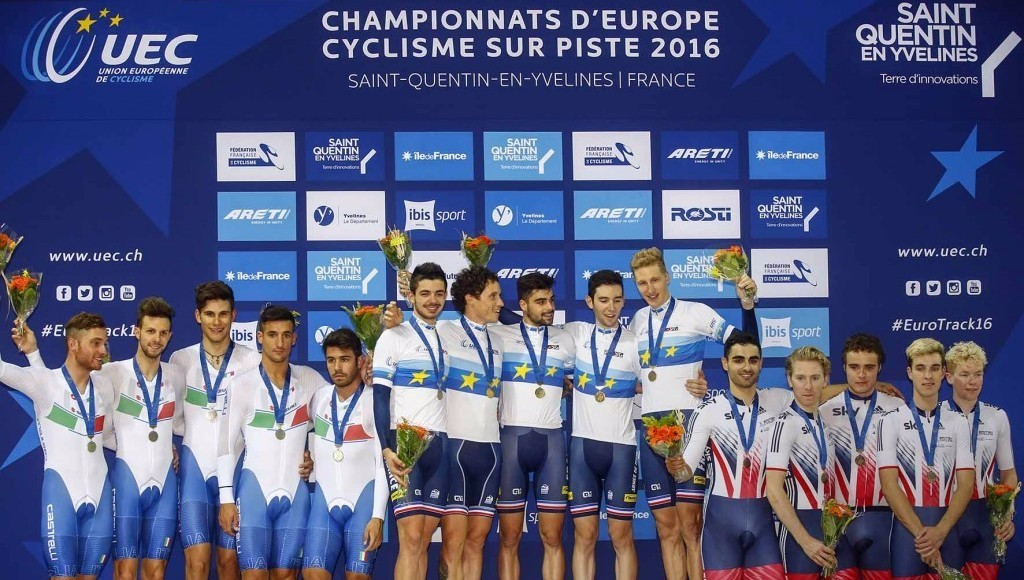 France claimed a stunning victory in the men's team pursuit event on home soil on day two of the European Cycling Union (UEC) European Track Championships at the National Velodrome Saint-Quentin-en-Yvelines in Paris.

The French team of Thomas Denis, Corentin Ermenault, Florian Maitre and Benjamin Thomas beat Italy by the smallest of margins to win the gold medal in front of a raucous home crowd.

The hosts won the race in a time of 3:57.594, finishing just over a second ahead of their Italian rivals.

Meanwhile, Great Britain completed the podium as they took the bronze.

In the women's team pursuit event, it was the Italians who were victorious by a much more comfortable margin.

The Italian team of Elisa Balsamo, Tatiana Guderzo, Simona Frapporti and Silvia Valsecchi finished over five seconds quicker than their nearest competitors in a time of 4:22.314.

Poland took the silver medal way behind in 4:27.845 whilst Great Britain secured a second team pursuit bronze of the day as they finished third in 4:26.744, beating France to the podium.

In the men's team sprint final, Poland were victorious by the smallest of margins.

The Polish team won the race in a time of 43.211 seconds, just a second quicker than Britain who claimed silver in 43.398.

The bronze was won by Germany, who finished in 43.083, after they beat hosts France to third place.

Elsewhere, Russia were victorious in the women's team sprint competition.

The Russians posted a time of 33.356 seconds which was enough to secure gold with Spain taking the silver in 33.425 and Lithuania finishing in third after they crossed the line in 33.871.

There was further Lithuanian success later on as Ausrine Trebaite took gold in the women's scratch race.

Elinor Barker of Great Britain finished in second, claiming the silver, whilst Kirsten Wild of The Netherlands completed the podium by finishing in third.

In the final race of the day, the men's elimination race, Switzerland's Loic Perizzolo saw off the rest of the field to take the gold medal.

Perizzolo went head-to-head with Greece's Christos Volikakis in the final stage of the race and went on to eliminate him to win the gold medal.

Jiri Hochmann of the Czech Republic, the penultimate rider to be eliminated, secured the bronze medal.