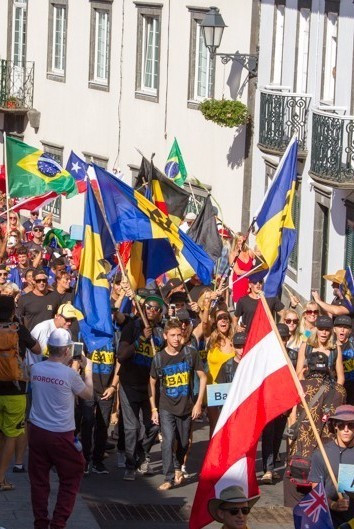 International Surfing Association (ISA) President Fernando Aguerre has claimed that the sport will bring a "youthful and fresh energy" to the Olympics when it makes its Games debut in Tokyo in four years time.

As the 2016 ISA World Junior Surfing Championships continued here in the Azores today, Aguerre told insidethegames what, he believes, surfing's inclusion will add to the Olympic Games.

“It will bring youth and a fresh way of doing things from the way we plan to have our competition to the atmosphere there will be," said Aguerre.

“It will be a two-week long beach and surfing festival which will include a lot of the other elements of the sport.

“Surfing is a sport but also a lifestyle, a culture and a relationship between the surfer and the environment.

“Who do you know that doesn’t want to be hanging out in the ocean in a wet suit with people who play with the waves?"

The Opening Ceremony here in the Azores on Saturday was perhaps the perfect example of the carnival atmosphere fans can expect from surfing inTokyo.

The mix of cultures and languages and the explosion of national colours during the Parade of Nations, and the wall of noise that exploded through the tranquil town of Ribeira Grande, set the tone for the week's action.

The excitement at the International Olympic Committee's (IOC) decision is clearly visible among those competing in the Atlantic this week, who should be at the peak of their careers in the Japanese capital.

A third day of intense surfing action here in the Azores began once again at 8am local time with a slightly bigger swell than yesterday.

Today saw the start of the competition's repecharge rounds with heats in all four categories.

In the boy's under-18 competition, Great Britain's Jake Ellington comfortably made it through to the second repecharge round as he maintained hopes of returning to the main competition.

Ellington posted a score of 17.27 whilst Tommy Miguez of Uruguay also produced a confident display as he scored 11.43 points to also go through to round two.

Strong performances from Victor Ferreira of Brazil and Argentina's Juan Cruz Ruggiero secured their passage into the next repecharge round of the boy's under-16s competition with scores of 11.20 and 10.90 points respectively.

The two girls' competitions also continued into their second rounds and the ominous Brisa Hennessy was the first competitor to move into round three of the under-18s competition.

The American scored easily the biggest total of the day, a sublime 15.17 points.

Meanwhile in the girls' under 18s repecharge round, Malia Osterkamp of the US and Spain's Isabel Gudin successfully moved into round two with impressive performances earning 10.76 and 10.10 respectively.

In the under-16s girls main event second round the majority of heats were low scoring, however there were high scoring performances by Neis Lartigue of France,who tallied 10.10, and Caroline Marks of the US who earned a total of 10.50.

The Championships are due to conclude on Sunday (September 25).