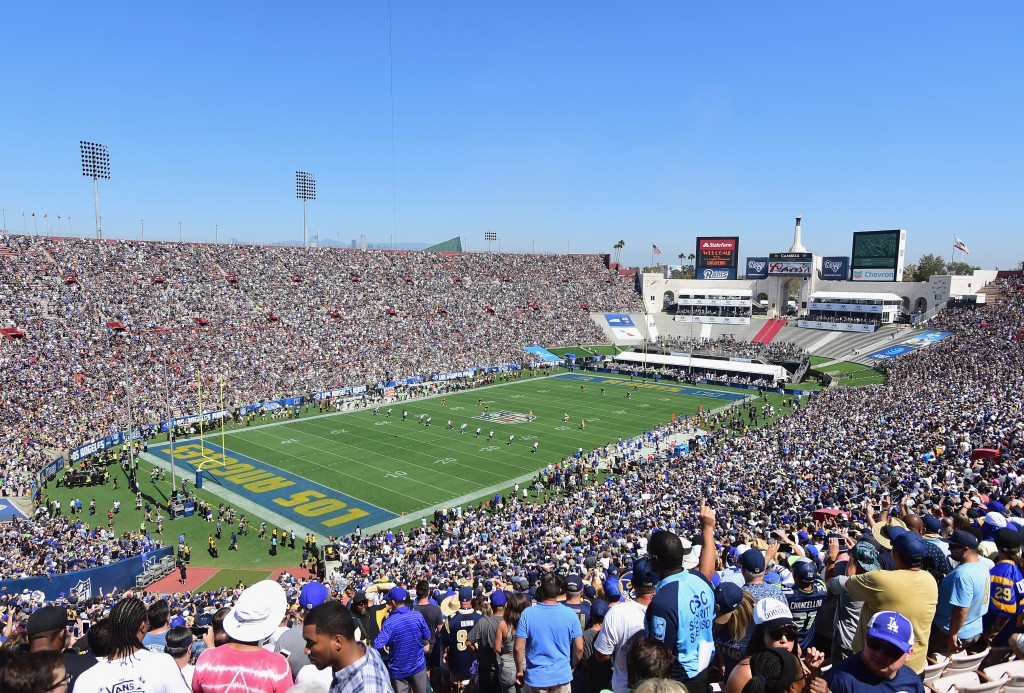 The committee behind the Los Angeles bid to host the 2024 Olympic and Paralympic Games hailed the "smooth running" of the first LA Rams National Football League (NFL) match following their return to the city.

The game against the Seattle Seahawks yesterday was the first NFL American football game to take place in Los Angeles since the Rams were moved to St Louis in 1994.

A 21-year stint away ended earlier this year when the team announced in January that it would return to California.

A crowd of 91,046 fans turned out to show their support at the Los Angeles Memorial Coliseum, a key venue for the city's proposed Olympic's bid.

The game, however, was far from a good spectacle with the Rams narrowly beating the Seahawks 9-3 in a match which did not feature a single touchdown.

Olympic spirit was on display at the match as the Coliseum’s Olympic Cauldron was lit before kick-off by Rams legends, producing raucous cheers from the crowd.

With the re-addition of the Rams, the greater Los Angeles area is now home to ten professional sports teams.

The city also has more venues, arenas and stadiums than any other American metropolitan area, and has hosted a number of international sporting events including two Olympic Games, the FIFA World Cup final and seven NFL Super Bowls.

"On behalf of LA 2024, I’d like to welcome the Los Angeles Rams back to a city that lives and breathes sport," said LA 2024 chairman Casey Wasserman.

“At the iconic LA Memorial Coliseum we witnessed what makes the City of Angels ready to welcome the world for the greatest celebration of sport on the planet - the Olympic and Paralympic Games.

"Thanks to our ideal, dependable climate, our existing, world-class sporting infrastructure, and our extensive experience hosting large-scale sporting events, LA 2024 is uniquely positioned to deliver a low risk, high tech and sustainable Games."

The LA Memorial Coliseum, which will host the Rams until 2019, was the venue for the Opening and Closing Ceremonies and track and field at the 1932 and 1984 Olympics.

The Coliseum is only the temporary home of the Rams before they move into a new $2.6 billion (£1.9 billion/€2.3 billion) privately-financed stadium in the Greater Los Angeles area in 2019.

The stadium will host the NFL Super Bowl in 2021 and will be an Olympic and Paralympic venue if LA is elected as the 2024 host city.

A host city will be elected at the International Olympic Committee Session in Lima in September 2017.