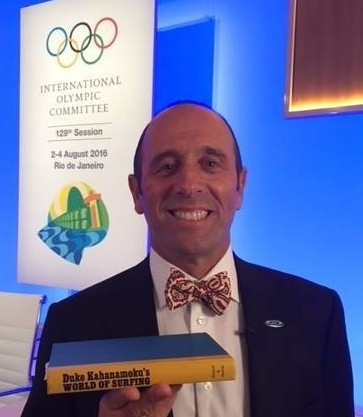 International Surfing Association (ISA) President Fernando Aguerre has claimed he has no concerns about the conditions competitors will face when the sport make its Olympic debut at Tokyo 2020.

Surfing won its bid to become a part of the Olympic programme in August.

Baseball and softball, karate, skateboarding, sport climbing and surfing were also added to the programme for Tokyo 2020 by the International Olympic Committee at its Session in Rio de Janeiro.

As a part of surfing's bid, competitions in both the ocean and using artificial waves were put forward by the ISA but it is natural water the competition will take place in.

Fears existed though that the waves in the summer months were not going to be sufficient for competition at Tokyo 2020, which is due to take place between July 24 and August 9.

Tokyo 2020 organizers said there would be no artificial waves in the event and that it would be held in a natural environment.

Shida Shita Point, located about an hour from Tokyo, is currently considered the favourite to host the competition.

The ISA, however, has sought the advice of external companies to analyse the possible conditions in the Japanese capital and Argentinian Aguerre, ISA President since 1994, is more than pleased with the results.

"We have done three studiees," Aguerre told insidethegames from his home in California, where he is currently recovering from a back injury which has prevented him from travelling here.

"Two were done by the largest company who specialises in wave forecast in the world,Surfline, who are based in Southern California, and the other was done by the Japanese.

"We have historical data that goes back four years detailing waves, winds and swell directions.

"We're very confident that in the two weeks we are there we will have good waves."

Surfing events at Tokyo 2020 are due to be held at the beginning of the Olympics to give the sport the maximum amount of time to complete its competitions in case of poor conditions.

"If we only had two days to complete the competition then that is a very narrow window," Aguerre said.

"However, we have agreed with the IOC that we will have days for the competition at the front end and then if there is a problem we have some later dates also."