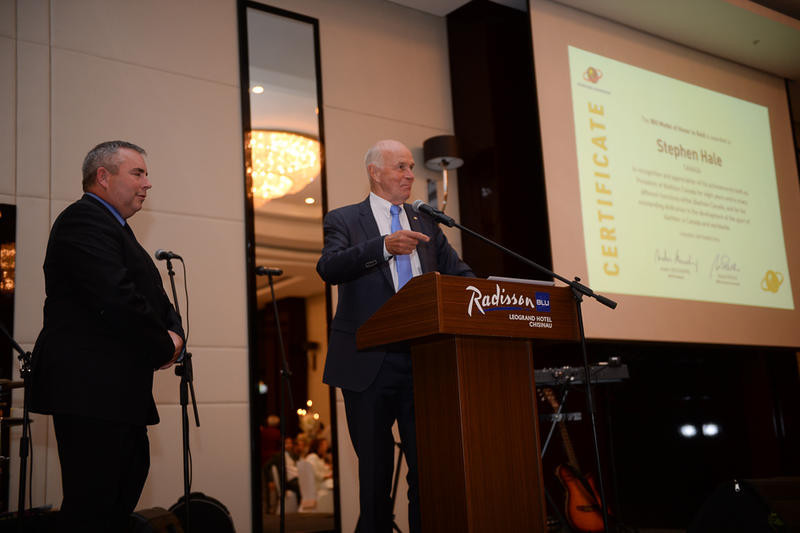 International Biathlon Union (IBU) President Anders Besseberg awarded the governing body’s Golden Medal of Honour to five nominees who were deemed to have made a considerable impact on the sport both nationally and internationally.

The golden honorary medals were awarded at the IBU Congress, which took place in Moldova’s capital city Chisinau.

Stephen Hale was honoured for his considerable role in the development of biathlon in Canada, having acted as a coach, treasurer, vice-president of high performance and eventually the President of Biathlon Canada.

He led the Canadian team at two Winter Olympic Games, Albertville in 1992 and Vancouver in 2010.

Following his long-standing work to develop the sport while an athlete, coach and international referee, Vasil Vasilkovski was also honoured by the federation, with a particular focus on his efforts to coach the Bulgarian biathlon team.

Vasilkovski, despite turning 80 during the summer, has continued to race and win veterans competitions in Bulgaria.

Benjamin Leitner was honoured due to his considerable work in Slovakia, leading their national federation between 1991 and 2002.

He was influential in the decision to by a stadium in Osrblie, which successfully hosted IBU World Championships Biathlon in 1997.

Norway’s Tore Boygard was the fourth recipient of the medal of honour, having served as the President of Norwegian biathlon for the last 10 years, as well as working as IBU international referee and technical delegate since 2006.

He also played a key role in contributing to the IBU’s technical committee during last year’s World Championships in Oslo.

The final recipient of the award was Michael Geistlinger, who has been a key legal voice in the IBU, having served as the chairperson of the Legal Committee from 1993 since 1998.

He helped set up the legal order of the newly established IBU, which saw him work with committee members to draft the governing body’s rules.

From 2004 to 2008, Geistlinger shifted to work as the IBU secretary general and in recent years has acted as an arbiter at the Court of Arbitration for Sport and a legal advisor for the International Skating Union.