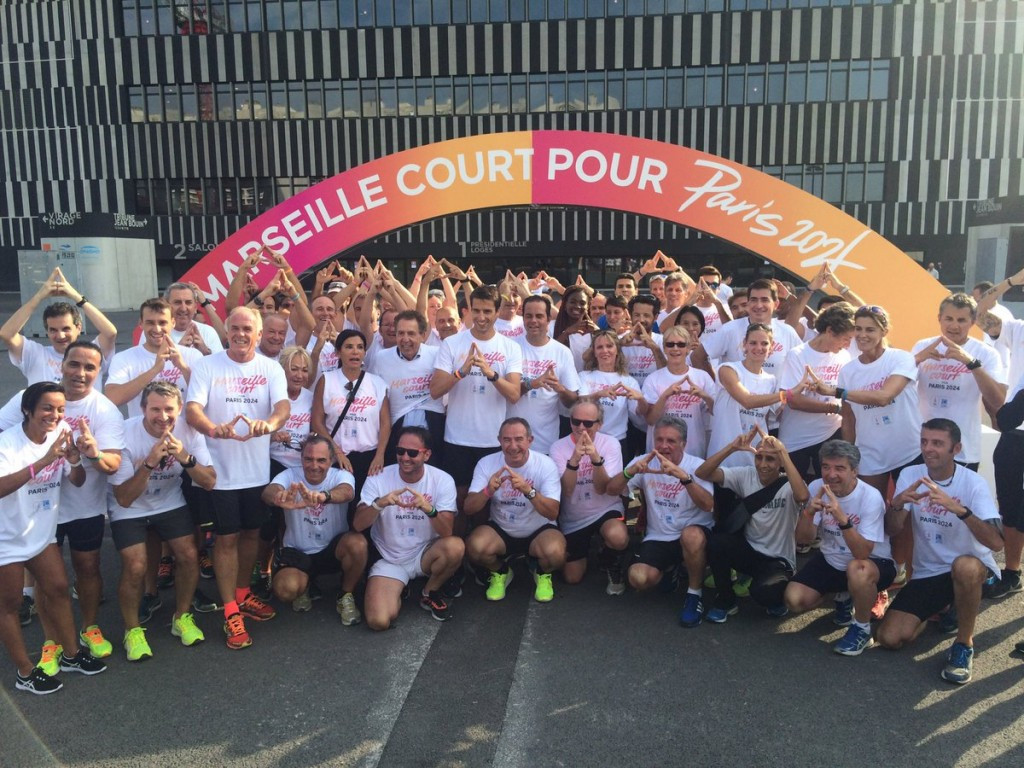 Paris has marked the one year countdown to the vote for the 2024 Olympics and Paralympic Games with a series of promotional events here and a message that they are a safe, but inspiring, choice.

The city is seeking to showcase itself as a diverse choice that enjoys nationwide support stretching far beyond the capital.

Marseille, the proposed location for Olympic sailing and some football matches, is being billed as a perfect example of this and thus formed a fitting showcase for the launch of "Tour de France" promotional circuit today.

Events began early this morning with a fun run ending here after a journey of exactly 2,024 metres from the Marina Marseille sailing venue.

All expressed their support for the bid before joining with the likes of Marseille Mayor Jean-Claude Gaudin to perform their new #GagnoneEnsemble - "together to win" gesture of support.

This message was also displayed by others on social media, including Marseille-born football legend Zinedine Zidane, now the coach of Real Madrid.

Estanguet and other officials then returned to the Marina in order inspect the proposed venues and meet with young schoolchildren taking up water sports for the first time - with the Sydney, Athens and London champion then kneeling-into a canoe to take an ad-hoc lesson.

The 38-year-old then turned novice himself by venturing out into the Mediterranean in order to try out 49er class sailing, coping admirably despite the boat being the fastest and among the most complex in the Olympic fleet.

Another visit is scheduled for Nantes next week before others to cities expected to include Toulouse, Nice and Lyon.

Paris is seeking to show it has learned from failed bids of the past.

London's more diverse and sports-orientated strategy - as well as its lobbying - was credited in engineering its last-gasp victory over the French capital in the race for 2012.

This is why soliciting nationwide support is seen as so crucial as well as using the bid as an attempted catalyst to inspire greater sporting activity in the country.

Paris does still face challenges; including the Presidential Election scheduled ahead of the vote next year, as well as the continued danger of security.

This threat is more obvious here than elsewhere due to the violence seen in the port city during this summer's European Football Championships, as well as the terrorist attack along the coast in Nice in 86 were killed and hundreds injured.

But Estanguet insisted that, after the problems that plagued preparations for Rio 2016, Paris remains a safe choice for his fellow International Olympic Committee (IOC) members.

"I think we are a safe choice in that we have expertise," the IOC Athletes' Commission vice chair told insidethegames.

"There is no risk [for the IOC] in choosing Paris because we have the full support of the French people.

"We have shown we can organise security at major sporting events by what we did at Euro 2016."

Paris is currently facing opposition from Budapest, Los Angeles and Rome ahead of a decision at the IOC Session in Lima on September 13 in 2017.