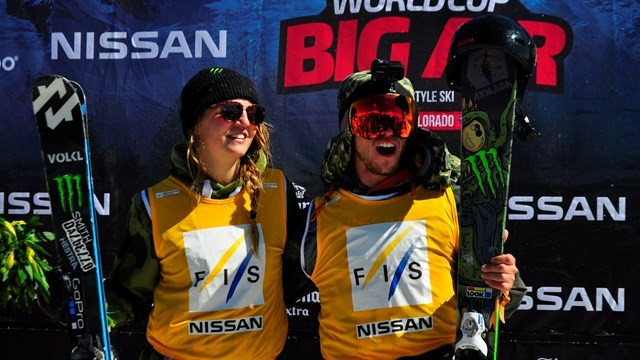 it was the first ever World Cup event to be held in Chile and the first elite level skiing competition to be held in the country since Portillo hosted the Alpine World Championships in 1966.

With the absence of the Norwegian slopestyle World Cup champion, Tiril Sjaastad Christiansen, sidelined after spraining her knee in the practice round on Thursday (September 1), Dahlström performed fantastically during the finals.

The Swedish skier dominated the competition with her signature tricks and flawless style, successfully landing each of her three runs.

"The jump was a little intimidating at the beginning, but with every single run I started to get the good feeling back," said Dahlström.

"Today I focused on tricks I know and tried to keep it stylish. It worked out pretty well so I'm super happy."

In second place was Switzerland's Giulia Tanno with the third World Cup podium of her career.

Tanno performed some incredible tricks, including a switch 1080, to show her credentials at the start of the World Cup campaign.

Chile's Melanie Kraizel made the most of home advantage to finish third and grab the biggest result of her career.

In the men's competition Harlaut performed his signature nosebutter dub 1260 to jump to the top of the leader board after the first run, although he was swiftly overtaken by Swiss youngsters Fabian Bösch and Luca Schuhler.

Harlaut, however, responded with a switch dub cork 1080 nose grab which, when combined with his previous scores, gave him a total of 183.60 which was enough to claim the yellow Big Air World Cup leader bib.

"I love being in Chile," said Harlaut.

"People are so nice over here and you could definitely feel an awesome vibe in the air during the whole competition, with people screaming as soon as you landed the trick."

Bösch, who finished only 0.8 points behind the winner, and Schuhler completed the top three.

The Big Air World Cup will now head to Milan, with a competition due to take place in the Italian city on November 11.

Mönchengladbach in Germany is scheduled to host an event on December 2, with Quebec City in Canada and Myrkdalen-Voss in Norway rounding off the season on February 11 and March 24 respectively.