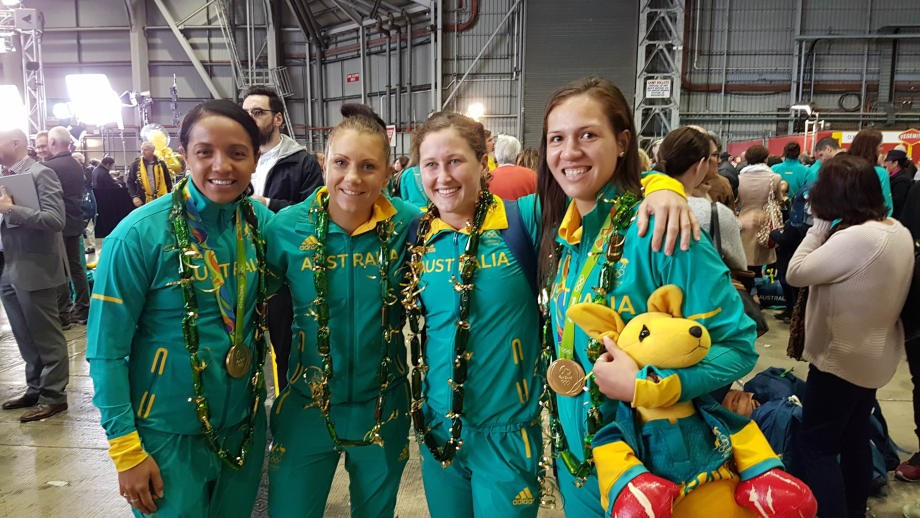 Australians who competed at Rio 2016 were given a heroes' welcome when they touched down at Sydney Airport today, with a number of dignitaries turning out to support the team.

Prime Minister Malcolm Turnbull and the Governor-General Sir Peter Cosgrove were among those to greet the competitors during a special ceremony held at Hangar 96 within the airport.

The Australian women's rugby sevens team, winners of the first-ever Olympic gold medal in the sport when they beat arch-rivals New Zealand 24-17 in the final, were one of the main attractions at the ceremony.

A number of the players posed for photos and signed autographs for those in attendance.

Several Australian athletes will head straight back into competition mode ahead of the 2018 Commonwealth Games on home soil in Gold Coast, while others will take time off before they return following a gruelling Olympic campaign.

The majority of the competitors admitted they were looking forward to getting back home but there were also athletes who expressed their disappointment that the Olympics in the Brazilian city had come to a close.

Australia finished 10th on the Rio 2016 medal table, returning with a haul of eight golds, 11 silvers and 10 bronze.

"It's so nice [to be home]," track cyclist Anna Meares, a bronze medallist in the women's keirin, said.

"I’ve been away for a couple of months with the track cycling programme.

"I think it got to a point where everyone in this team was just watching the clock tick by until we could get on that plane and know that we were coming home."

Olympic swimming gold medallist Bronte Campbell, a member of the victorious women's 4x100 metres freestlye relay quartet, said she thoroughly enjoyed her time away with the team, admitting she was sad to be leaving her team-mates.

"It’s really sad, we're all breaking up," she said.

"All the swimmers are spreading around but I'll see them again.

"But the people I met from water polo and rowing, I probably won't see again for years.

"We're all part of the same team.”