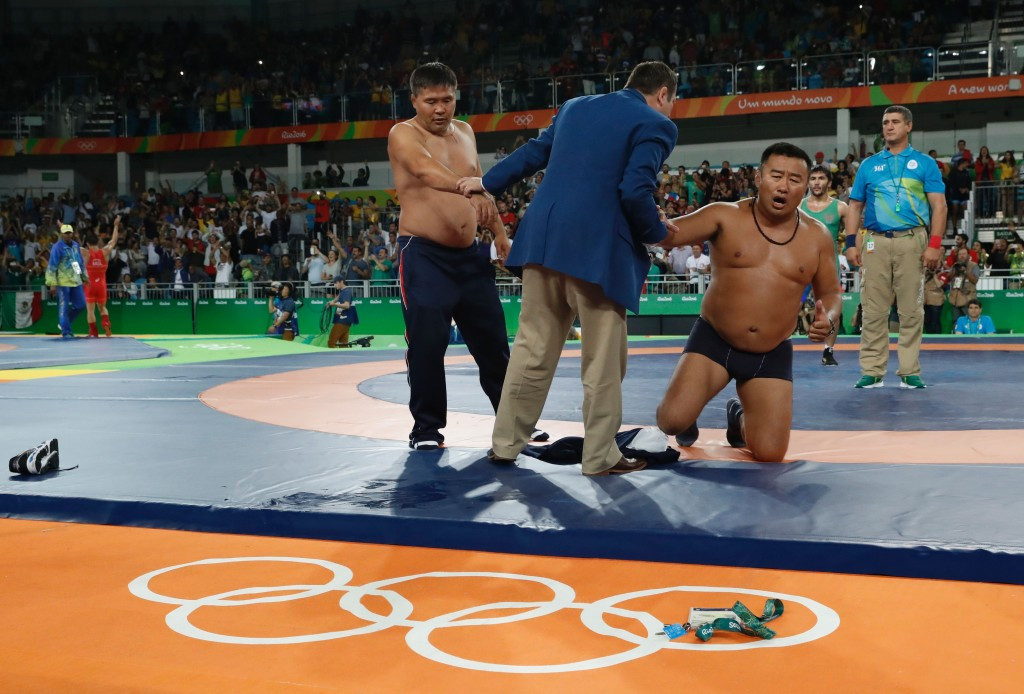 Three referees have been suspended by United World Wrestling (UWW) as a result of "suspicious officiating" of a quarter-final bout as the last men’s freestyle gold medals were awarded at Carioca Arena 2 in Rio de Janeiro.

Mavruzov emerged as an 8-5 winner in the contest to advance to the semi-finals, but was eliminated by Russia's Soslan Ramonov.

UWW revealed that the match and all circumstances surrounding the contest are now the subject of an investigation by its Ethical Commission, with a full report set to be produced.

It would not be the only controversial contest involving Mavruzov during the day, with the Uzbek wrestler winning 8-7 against Ganzorigiin Mandakhnaran in the bronze medal bout, leading to the Mongolian’s coaches removing their clothes in protest and alleging the referees had "supported" their opponent.

"This was a protest, there was a problem with the refereeing," said Byambarenchin Bayaraa, one of the two coaches who protested.

"The Mongolian wrestler won 7-6 and he lost because of this [the judges' decision].

"This is the only time in history of wrestling with point penalty.

"The referees were not good, they only supported the Uzbek.

"After the challenge for five seconds we win, and we are very happy for this medal.

"Three million people in Mongolia waited for this bronze medal and now we have no medal.

"One hundred per cent of the stadium supported us."

Russia’s Ramonov, who had beaten Mavruzov in the semi-finals, went on to claim the gold medal in the division by beating Azerbaijan’s defending champion Toghrul Asgarov by superiority.

The second bronze medal in the division was awarded to Italy’s Frank Chamizo, after he achieved a 5-3 win over the United States’ Frank Molinaro.

There was success for Molinaro’s team-mate Kyle Snyder, with the world champion storming through the rounds of the men’s 97kg event.

The world champion was provided with a strong test in the gold medal match, but eventually claimed a narrow 2-1 victory over Azerbaijan’s Khetag Gazyumov.