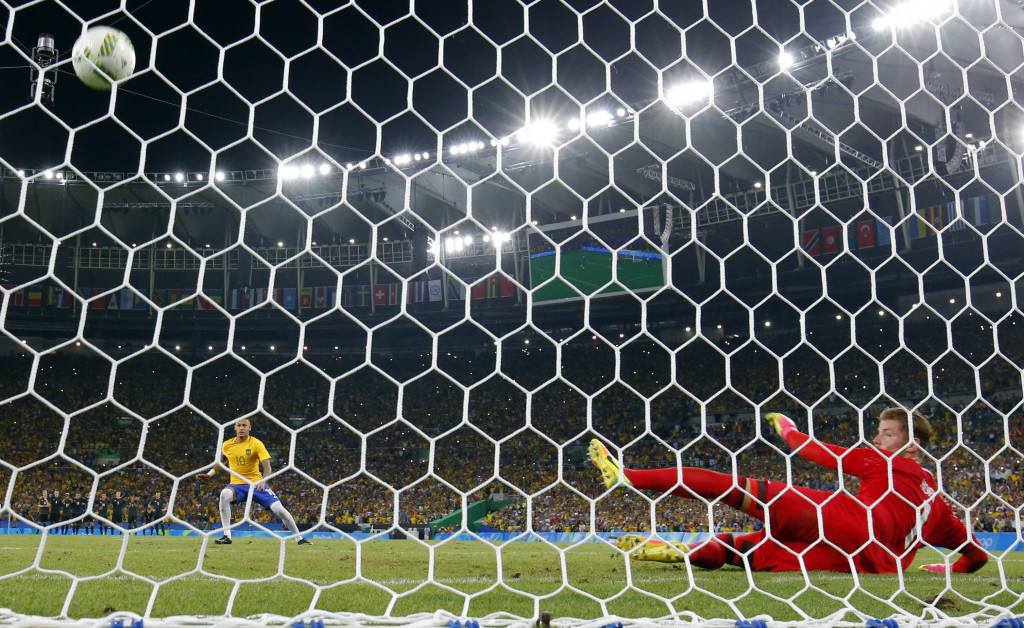 It may have taken until the eve of the Closing Ceremony, but Rio 2016 has finally fully burst into life for the locals with a Brazilian men's football gold at the Maracanã that combined history and revenge with utterly thrilling and nervewracking sport.

Brazil conceded their first goal of the tournement as scores were locked at 1-1 before the hosts achived one of the hardest accomplishments in sport - overcoming Germany in a penalty shootout.

It simply had to be Neymar, the man who has travelled from hero to zero and back to hero again during the course of this tournament, who confidently converted the winning penalty before celebrations erupted across the city.

They also secured the sweetest of revenges for their humiliating 7-1 loss to the Germans in the semi-finals of the World Cup they hosted in 2014, as well as in the London 2012 Olympic final against Mexico.

Neymar's spectacular free-kick from 20 metres out had given the home side the lead on 27 minutes.

The ball dipped and swerved in the air before crashing into the net via the underside of the bar as delirium broke out around the stadium.

Flags were hurled into the air as the crowd jumped up and down in the sorts of celebration they had so hoped to perform in the same stadium two years ago.

Germany, once again, had threatened to spoil the party after Brazil had missed several chances.

Maximilian Mayer clipped the ball into the bottom corner to equalise when he was found unmarked by Jeremy Toljan on 59 minutes.

The scores remained level at 90 minutes and again after extra-time had been played.

This meant penalties, almost a specialist sport for the clinical Germans.

Boos and whistles erupted around the stadium every time one of the European players stepped up.

It had no impact, however, at least at first, as the four kickers converted successfully from each side.

Nils Peterson then say his effort expertly saved by Brazilian goalkeeper Weverton, leaving Neymar with the chance of the glory.

He stuttered as he began his run-up before slotting the ball home as bedlam broke out.

It was the perfect result for the hosts after three Olympic final defeats.

"The only thing on my mind was I had to do this," said Neymar.

"I can't begin to describe my feelings.

Nigeria enjoyed a superb 3-2 win over Honduras to secure the bronze medal.