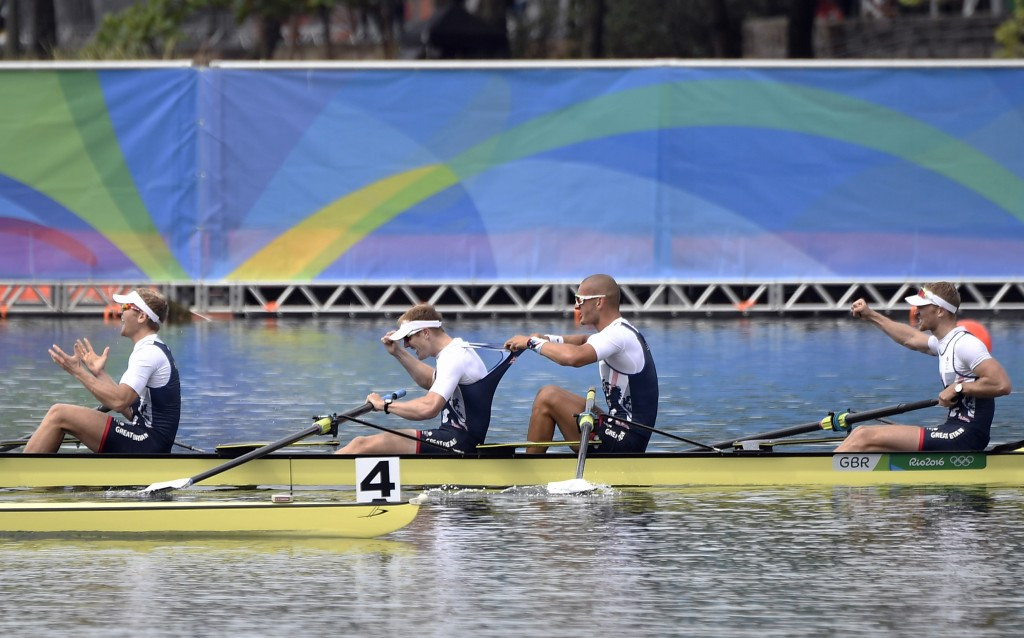 Great Britain claimed a quickfire double gold in rowing today as the men’s four romped to victory less than 15 minutes after Helen Glover and Heather Stanning defended their women’s pair crown at the Lagoa Stadium in Rio de Janeiro.

The British quartet of Alex Gregory, Mohammed Sbihi, George Nash and Constantine Louloudis were the only team to break six minutes in the final, leading through all three 500 metre checkpoints on the way to victory in 5min 58.61sec.

World silver medallists Australia were second in 6:00.44 and world champions Italy ended the race with an impressive sprint to round out the podium in 6:03.85.

Victory puts Britain into the history books as the only country to win the boat class five times in a row with bow Gregory being the only member of the victorious London 2012 crew.

"We got off to a really good start and we were up straight away," said Gregory.

"That was what we were most nervous about, whether our starts were equalling the Aussies or not, because we hadn’t met them yet.

"So that gave a boost of confidence for me, being the most distance from them in the bow seat. It was a great position to be in.

"They came back to us coming through the 1km, but I had this sense of confidence, this sense that we were just waiting to move.

"That’s the thing you build up over a year of racing together - this sense of knowledge and belief in each other and knowing what they can do.

"So I was just sitting there enjoying it, waiting for them to move, and then I joined them basically."

Britain then scored a second victory in the women’s pair as the duo of Glover and Stanning became the only British women to have won two Olympic golds in rowing with a time of 7:18.29.

New Zealand’s Rebecca Scown and Genevieve Behrent took the silver medal in 7:19.53 and Denmark’s Hedvig Rasmussen and Anne Andersen came away with bronze in 7:20.71 to secure their country’s first-ever medal in the boat class.

Also victorious today were the French men’s lightweight double sculls of Jeremie Azou and Pierre Houin, winning in 6:30.70 after a tight final.

Finishing just behind were Irish brothers Paul and Gary O’Donovan, who won their country's first-ever medal in rowing and also the first for Ireland at Rio 2016.

They clocked 6:31.23, 0.16 seconds faster than bronze medallists Kristoffer Brun and Are Strandli of Norway.

In the women’s lightweight double sculls, the Dutch crew of Ilse Paulis and Maaike Head led the race from start to finish to earn gold in 7:04.53.

The silver medal went to the Canadian duo of Patricia Obee and Lindsay Jennerich in 7:05.88 and bronze was won by China’s Wenyi Huang and Feihong Pan in 7:06.49.