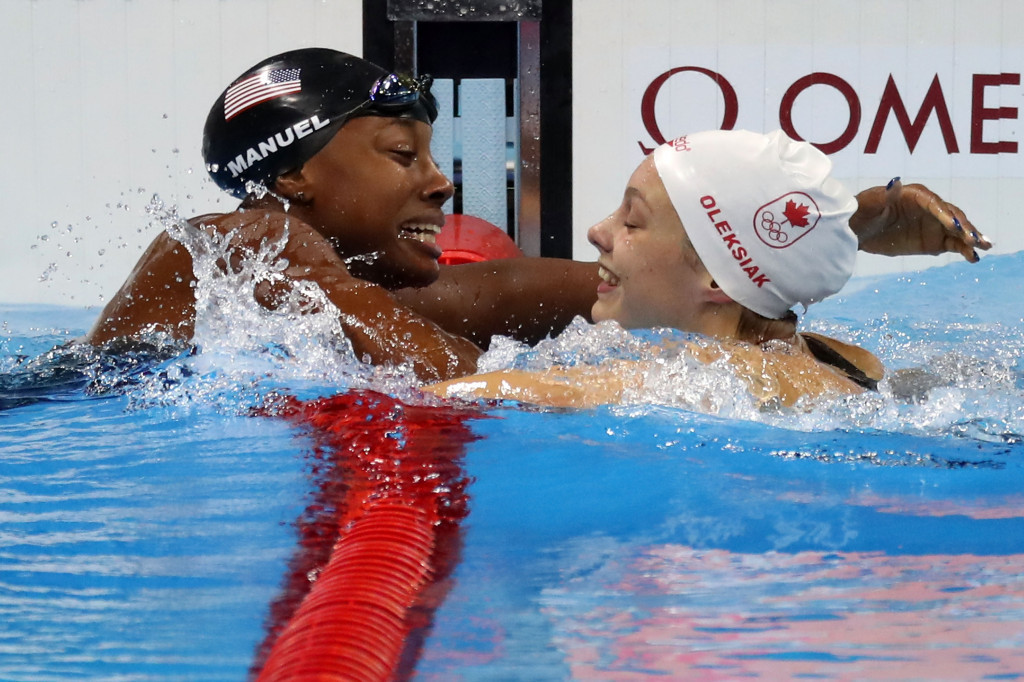 Simone Manuel and Penny Oleksiak tied for gold in the women's 100 metres freestyle on another enthralling night of swimming action also topped by a 22nd Olympic gold medal for the irrepressible Michael Phelps.

Phelps, who had already claimed three gold medals here this week, lay down in third place at halfway in the 200m individual medley final behind arch-rival Ryan Lochte and home hope Thiago Perreira.

He then produced a stunning breaststroke to move almost a full body-length clear before powering even further ahead in the concluding freestyle.

The 31-year-old promptly became the first man to win the same individual Olympic swimming title on four occasion - a feat he could achieve again tomorrow in the 100m butterfly.

Lochte and Perreira, unable to cope with the burden of challenging Phelps, fell to fifth and seventh repectively.

It needed something special to match this performance but the women's 100m freestyle managed to achieve this - and more - with a contest of compelling drama and history.

At one stage it looked as if Australia could be celebrating as sisters Cate and Bronte Campbell led, but they swifly faded out of contention, in fourth and sixth respectively.

US star Manuel and Canadian 16-year-old Oleksiak touched in an identical Olympic record time of 52.70 and Sweden's Sarah Sjöström snatched bronze in 52.99.

It was just the third time an Olympic swimming gold had been shared, and the second in this event after US duo Carrie Steineseifer and Nancy Hogshead achieved a similar feat at Los Angeles 1984.

"It means a lot," she said afterwards.

"I mean, this medal is not just for me. It's for a whole bunch of people that came before me and have been an inspiration to me.

"Maritza [Correia], Cullen [Jones], and it's for all the people after me, who believe they can't do it, and I just want to be inspiration to others that you can do it."

Oleksiak, who was just three months old when Phelps competed at his first Games in Sydney, becomes the first individual Olympic champion born in the 2000s.

"This is amazing, to tie for a gold - I never thought I'd win a gold," she said.

A fabulous night for the US had begun in the 200m backstroke when Ryan Murphy dominated to win gold in 1:53.63.

Mitchell Larkin took Australian silver in 1:53.96 while there was Russian bronze for Evgeny Rylov in 1:53.97.

She touched first in 2:20.30 to beat Russia's Yuliya Efimova, who finished fast for second in 2:21.97 and second silver of the Games after only having been given permission to compete last week.