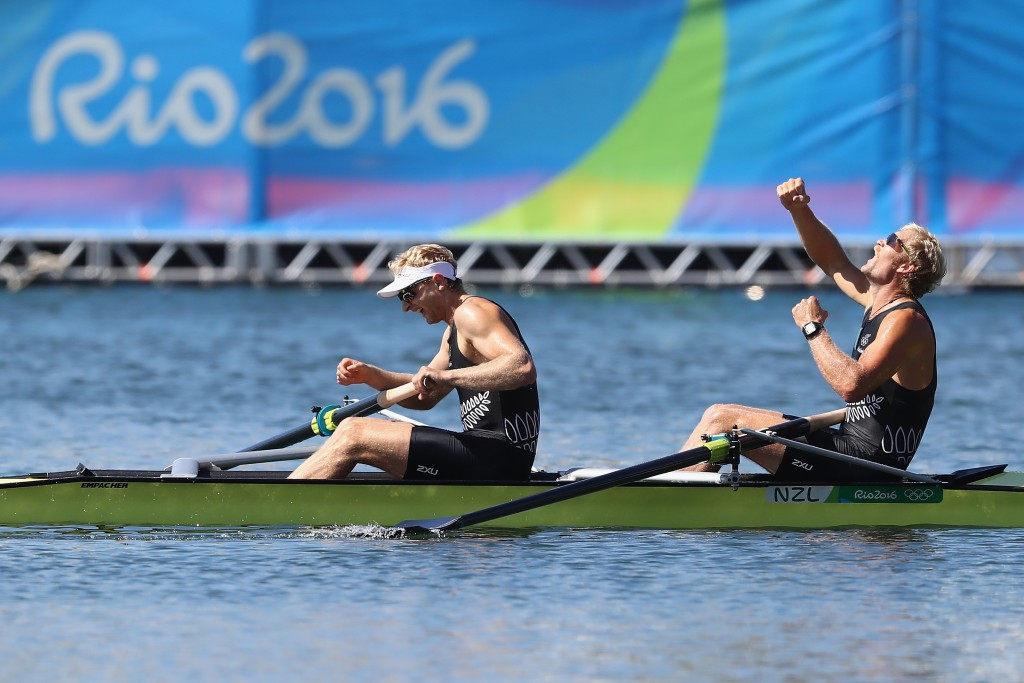 The first day of Rio 2016 rowing finals ended with Germany heading the medals table after taking gold in both men’s and women’s quad sculls.

But the undoubted highlights of a day that organisers will have been relieved to complete without further mischievous intervention by the capricious Carioca weather gods were two extraordinary feats of endurance over a sustained period of excellence on the water.

First the New Zealanders Eric Murray and Hamish Bond registered a time of 6 min 59.71sec to cruise to a second Olympic men’s pair title in what was their 69th consecutive victory in coxless pairs - a truly staggering statistic.

The pair were in command from before halfway and were able to witness a battle royal for silver that was won by South Africa, with Italy third and Great Britain fourth.

"We just really tried to maintain a pace that nobody else can manage," said Murray afterwards.

"We have managed to go unbeaten which has been an amazing thing."

In the very next race, the women’s double sculls, Great Britain’s Victoria Thornley and 40-year-old Katherine Grainger set off as though their lives depended on it and were more than half a second up by halfway.

They very nearly held on for what would have been Grainger’s second consecutive Olympic gold, but the dogged and disciplined Polish pair of Natalia Madaj and Magdalena Fularczyk-Kozlowska held onto their coat-tails and overhauled them close to the finish-line, winning by 0.95 seconds with a time of 7:40.10.

Grainger’s Olympic record now stands at an extraordinary one gold and four silvers, starting with the Sydney 2000 Games - a feat of sustained endurance over more than a decade outstripped only by Sir Steve Redgrave’s haul of five Olympic golds.

Reflecting afterwards on the "dramatic" race, Grainger said: "There have of course been many, many dark days when I couldn’t see this happening so to be standing in the Rio sunshine with a medal around my neck is amazing."

She continued with a comment that had a slight echo of Sir Steve’s famous remark after his fourth gold, to the effect that if anyone found him close to a rowing boat again they could shoot him.

"Regarding Tokyo 2020," Grainger said, "Mum and Dad, I promise I won’t put you through it again."

"It’s a lake near the ocean, so we expected hard conditions," said Germany’s Philipp Wende, a member of the victorious men’s quad sculls crew.

"The lake has turned up some tricky conditions," Murray, the New Zealander, observed.

"We are an outdoor sport, you have got to expect it to be a little bit bumpy.

"I think the results show it."

Germany clocked a time of 6:06.81 to win the men's quad sculls, finishing 1.15 seconds ahead of silver medallists Australia and 3.84 seconds faster than third-placed Estonia.

In the women's quad sculls, the Germans topped the podium with a time of 6:49.39 and were followed in the standings by The Netherlands, second in 6:50.33, and Poland, the bronze medallists in 6:50.86.

There were also victories today for Croatia in the men's double sculls and Switzerland in the lightweight men's four.