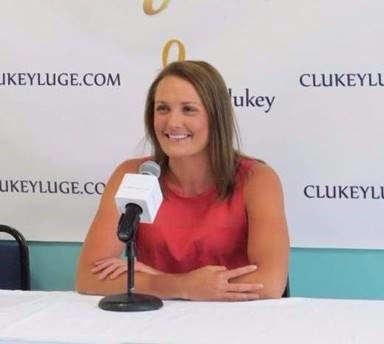 American Julia Clukey officially announced her retirement from luge at a press conference in her hometown of Augusta.

The US slider decided to end her career following concerns about her future health, after suffering from Arnold-Chiari malformation, a congenital brain condition, throughout her career.

Clukey, 31, first tried luge aged 12 during a recruiting event in Portland, and has competed for 19 years.

During her career she finished 17th at the 2010 Vancouver Olympics and won the Norton US National Championship in 2012 along with two silver medals in World Cup competition.

Clukey also nearly qualified for the 2014 Sochi Olympics, but missed out by just .013 seconds.

"I've always known that I wouldn't be able to luge forever," she said.

"I had planned to retire after 2018, but as I have told students in my presentations, in life you are going to face adversity and it is up to you how you respond to those situations that defines you."

Clukey had brain surgery in 2011 to attempt to limit the pain in her neck and skull.

She spoke at the press conference about how the condition has resurfaced and severely impacted her ability to train at the level necessary for her to compete at Olympic level.

"At this point, the level of pain during and after my workouts really limits my training and could impact my future health," she said.

"With the support of my family, friends, doctors and USA Luge, I recognise that my health is the number one priority and strongly believe this is the best decision for me."

USA Luge chief executive Jim Leahy added: “It is always difficult for an athlete to walk away from a sport that has been their life-blood, but to end it for medical reasons is a tough pill to swallow.

"Julia’s many accomplishments as an Olympian and world class athlete has well represented USA Luge both at home and abroad.

"Her courage and competitiveness will be the standard by which we will measure all future athletes.

"We wish her nothing but the best as she begins the next chapter of her post athletic career.”