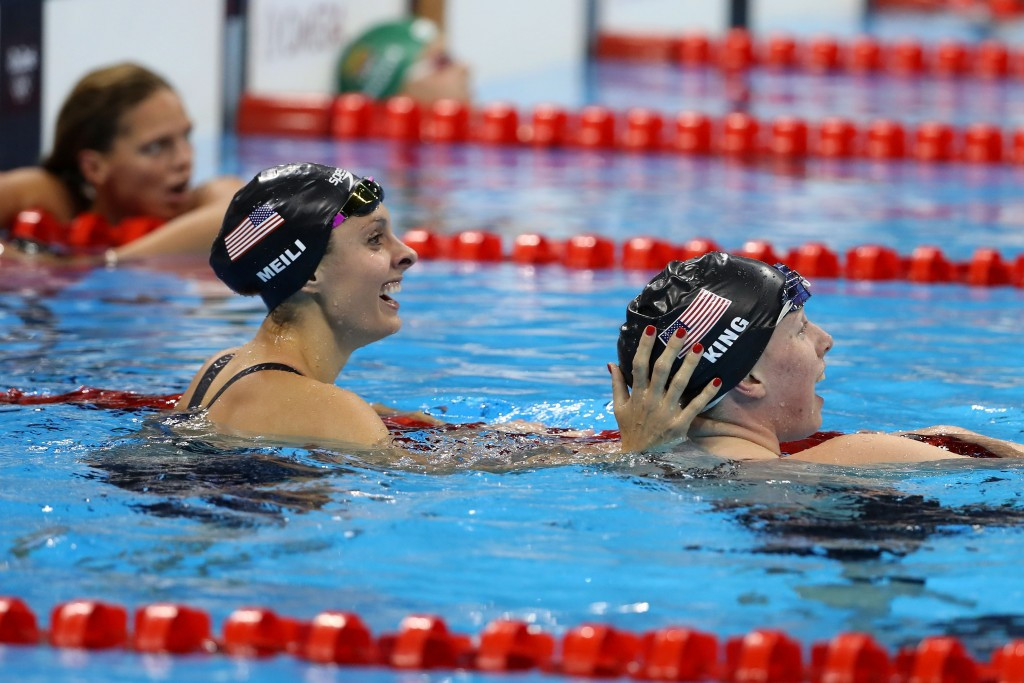 Lilly King beat controversial Russian Yuliya Efimova in the Olympic 100 metres breaststroke final here to claim victory for United States, and, some would say, for clean sport on another night where the sport's problems with doping were never far from the surface.

Efimova was only granted permission to compete late last week by the Court of Arbitration for Sport (CAS) after being initially barred due to an International Olympic Committee (IOC) rule banning Russian athletes who had served doping suspensions.

The four-time world champion was banned for 16 months in 2013 after failing for the anabolic steroid hormone DHEA the previous year.

She also tested positive again this year for meldonium but was cleared of wrongdoing by the International Swimming Federation (FINA) due to a lack of proof over whether she had taken the substance before or after it was banned on January 1.

King, a 19-year-old favourite from Indiana, had been frank in the build-up to this evening's showdown, admitting she is "just not a fan" of the Russian.

Efimova, who had stoked the flames by wagging her further in a number one gesture after her semi-final victory last night, entered to loud boos and whistles from spectators in the Stadium.

She found herself down in fourth place at halfway as King shot in front before recovering during a strong second-half.

"It was so incredible, winning a gold medal and knowing I did it clean," said King afterwards.

Her rival said afterwards: "I'm just happy to be here - a week ago I didn't even know if I'd race, because I'm Russian."

King's team-mate Katie Meili took the bronze medal in 1:05.69 and the two embraced in and out of the pool afterwards.

Tellingly, however, there was no obvious handshake or congratulation between King and Efimova, either after the race or during the medals presentation.

One athlete with a chequered doping past did finish top of the podium, however, as Sun Yang of China paced his effort superbly to win the 200m freestyle.

Sun, silver medallist at London 2012, has earlier been at the centre of what almost turned into a diplomatic incident after Chinese officials furiously called for to Australia to apologise after Mack Horton referred to him as a cheat following his 400m freestyle victory.

Sun served a three month doping ban after failing for banned stimulant trimetazidine in 2014, although it was not disclosed until later.

The 24-year-old Sun attempted to throw his cap into the crowd in celebration only but mistakenly threw it into the pool instead.

Hungary's Katinka Hosszu claimed her second gold medal of these Olympics in the 100m backstroke.

She won in 58.45sec ahead of US star Kathleen Baker, who clocked 58.75, one hundredth clear of Canada's bronze medallist Kylie Masse.

A good night for the US began when Ryan Murphy took the men's 100m backstroke in Olympic record time of 51.97.

China's Xu Jiayu won the silver medal in 52.31 and another American, David Plummer, the bronze in 52.40.

There was a surprise as Michael Phelps was beaten in his 200m butterfly semi-final by Hungary's Tammas Kenderesi in a swift 1:53.96.

Defending champion Le Clos returned to the pool to finish third and set-up a tantalising rematch in tomorrow's final.