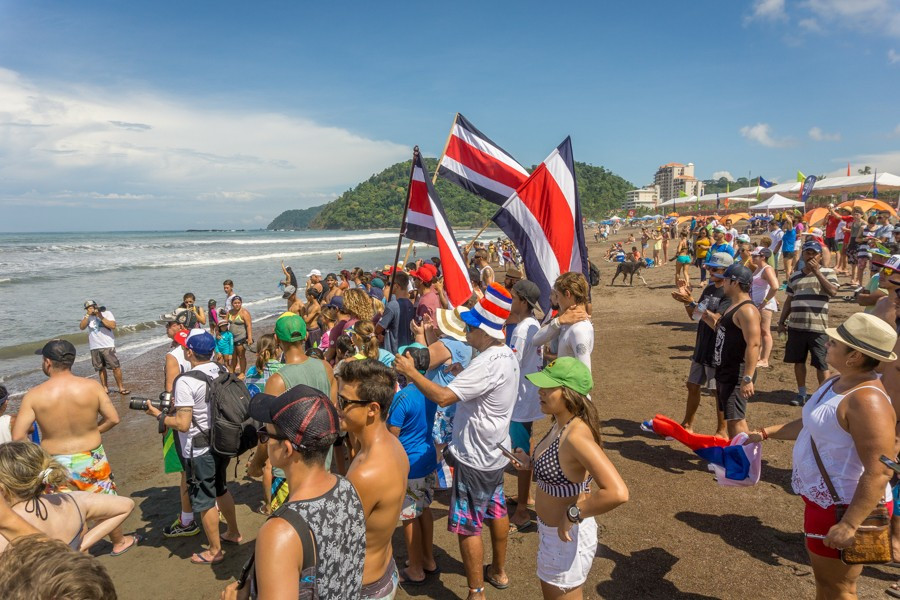 The competitors in the open men tournament, from 26 countries, displayed a number of impressive performances.

The field of 96 completed a marathon day of 24 heats in tricky, two to four foot surf, with thousands of spectators present to witness the world-class competition and support their nations.

National flags littered the beach and national chants were sang as the countries supported their athletes in the water.

Costa Rica, the home nation, did not disappoint those in attendance, as all four male athletes passed through their round one heats.

Carlos Muñoz paved the way for the hosts, navigating the tricky, beach-break conditions with expertise to notch a heat score of 16.83.

Portugal’s Guilherme Fonseca, who won the fourth heat of the morning with a total of 13.04, commented on his experience so far.

“I feel really proud to represent my country and my people," he said.

"Costa Rica is such a beautiful place and my plan is to just keep going and having fun.

"I am feeling really confident with my surfing so I am expecting great things this week.”

ISA President Fernando Aguerre, who is in Rio attending the 2016 Olympic Games following the International Olympic Committee’s decision earlier in the week to include surfing at Tokyo 2020, spoke about the start of the action.

“What an amazing start to the competition," he said.

"I was particularly impressed by the enthusiasm from the local Costa Rican surfing fans who numbered well into the thousands.

"They supported their surfers all day long and showed the utmost respect and sportsmanship for the visiting nations throughout the whole day of competition."

No-one has been eliminated yet from the competition.

Those that received a third or a fourth in their heats will fall to the repechage round where they have a second chance to progress.

However, a repechage loss leads to elimination.