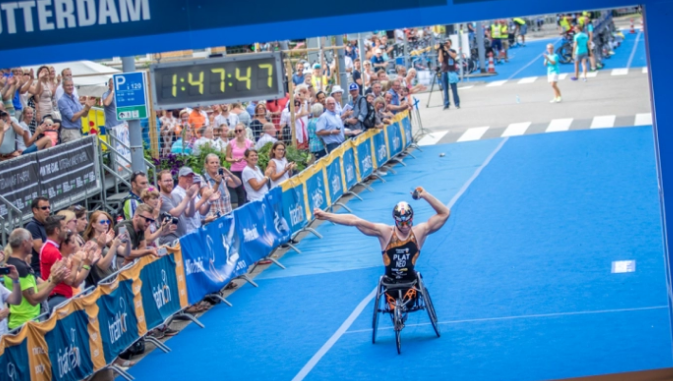 Schabort had to settle for silver as Geert Schipper came hope in third to ensure another Dutch triathlete on the podium.

"It was great, the weather was perfect, there were a lot of fans for me, so it was great,” Plat said.

“The bike was really technical, I went a little bit slow to check all the corners and the last part was really fast."

Kendall Gretsch of the US claimed her 10th successive win and third world title in the women's PT1.

She won by more than five minutes ahead of Britain's Lizzie Tench with Spain’s Eva María Moral Pedrero third.

Britain’s Andrew Lewis secured his first world title in the men's PT2, leading home Mark Barr of the US and Stephane Bahier of France respectively.

“I can’t believe it, I had a really bad race last year in Chicago - I did an extra lap - but this one we absolutely nailed it,” Lewis said.

“I’ve been focusing really hard on my swimming and biking, and haven’t really even being doing that much running, so I was surprised.”

The US won another gold medal as Allysa Seely won the women's PT2 in front of silver medallist Liisa Lilja of Finland and another American, Hailey Danisewicz, who was third.

In PT3 competition, Russia's Denis Kungurtcev won by more than a minute ahead of Spain's Alejandro Sánchez Palomero and Daniel Molina, who respectively took silver and bronze.

The women's title went to France’s Manon Genest, who beat Australia's Sally Pilbeam into silver and her compatriot Kerryn Harveyon into bronze.

There was German gold in the men's PT4 as Martin Schulz reclaimed  the title he lost in 2015.

He won by more than half a minute ahead of Yannick Bourseaux of France with Spain's Jairo Ruiz Lopez doing enough for bronze.

American Grace Norman was crowned as women's PT4 champion after Britain's 2015 winner Lauren Steadman crashed out during the first lap of the cycling.

The US medal rush continued in the PT5 with Aaron Scheidies taking the title ahead of Ukraine's Vasyl Zakrevskyi.

Hector Catala Laparra was awarded the bronze after a tight finish between the minor medallists.

The event was the first stand-alone Para-triathlon World Championship ahead of the sport's Paralympic debut in Rio in September.