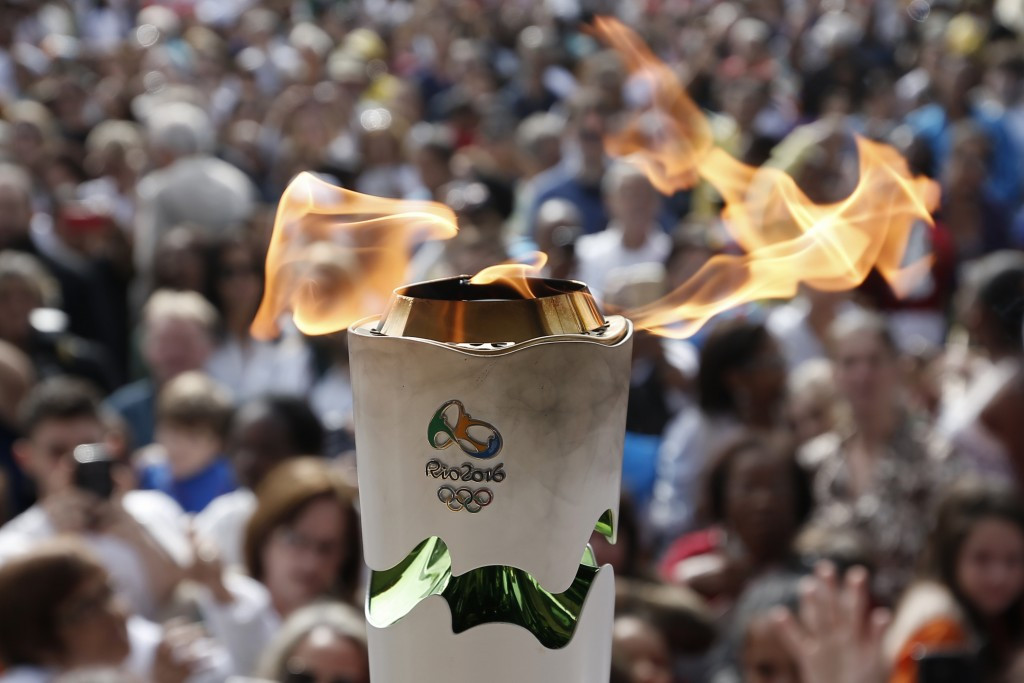 With less than a month to go before the Games open in Rio, the Olympic flame arrived in the town of Rio Grande, the southernmost point on its journey.

It has now visited every State in Brazil and more than 7,000 people have already transported it in one way or another.

At the Boqueirao farm in São Sepe, it was greeted by another fire, the traditional Fogo de Chao.

Farmers have lit these in their barns for centuries.

In Cacapava do Sul, Gaucho dancers formed a guard of honour at the entrance to the historic Forte Dom Pedro.

Throughout this Relay, the Torchbearers have been of a wide mix.

Oceanographer Lauro Barcellos carried the flame in a caico, a small sailing boat used for fishing on the Rio Grande.

In Pelotas, which celebrated the anniversary of its foundation, Cristina Oliveira was chosen to carry the flame for her work in rescuing abandoned pet animals.

It is just a few weeks though since the death of a big cat used in a flame celebration caused widespread outrage.

When the Torch visited visited a zoo connected to a military training base in Manaus, Juma the jaguar was displayed.

When it later escaped, it was shot by a soldier, prompting a shamefaced apology from organisers.

‘’We made a mistake allowing the Olympic Torch, a symbol of peace and unity, to be shown next to a wild animal in chains," a statement said.

"This image runs counter to our beliefs and values.’’

A week later in Maracaju, a 27-year-old protester threw water at the flame as it passed.

Though he later told police it had been a dare, many felt his actions represented a protest against the cost of the Games in a country where many are so poor.

For the most part though, the Relay has in the words of organisers been "received with warmth and joy".

It was certainly the case for 27-year-old Torchbearer Romeu Matos.

He even proposed to his girlfriend and fellow Torchbearer Samya Taliani Silva in São Luis near the Amazon rain forest.

Fortunately for him, she said yes and they carried the Torch hand in hand and gave a whole new meaning to the kiss of the Torches, the term used to describe the transfer of the flame.

In Rio Grande do Norte, teacher and blogger Maria de Moura ran with the flame.

She also took part in one of the first same sex marriages in Brazil.

Her selection reflected the Agenda 2020 reforms to the Olympic Charter which now explicitly outlaw discrimination on the grounds of sexual orientation.

Ever since the decision to take the Games to Rio was made in 2009, there has been a feeling that these are not just South America’s Games.

One of the youngest Torchbearers, 12-year-old Jaqueline Maria Caldas, even admitted that Argentina’s Lionel Messi was her sporting hero.

The symbolism was completed with a visit to the Iguacu falls which span the boundary between Brazil and Argentina with Paraguay close by.

It remains a sore point that Brazil have never won Olympic football gold but Gilmar, a member of the 1984 Olympic squad which won silver, carried the flame in Erechim.

The Torch Relay has been attended by a cavalcade of culture.

There has been traditional Brazilian dance, robotics, and in Cascaval, organisers promised "dancers dressed as Greek gods who will present a play’’.

In the last week, para-gliders accompanied the Relay as it entered Encantado.

The identity of the final Torchbearer remains a closely guarded secret, though it should be pointed out that Pele has already carried the flame in Campo Maior.

Not the man they call The King of Football in these parts, but a long distance runner.

‘’I started off playing football and people nicknamed me Pele but I was never any good," said the man not otherwise known as Edson Arantes do Nascimento.

"But I have found fulfillment in running."

When the flame does arrive in Rio, it is expected to burn in a city centre location for the duration of the Games.