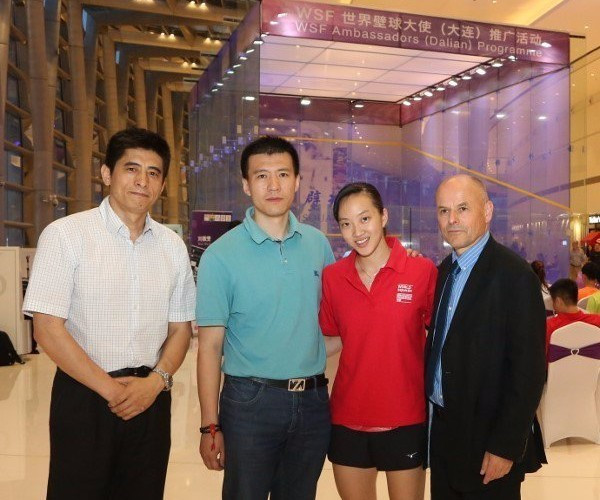 China have launched a bid to stage the Women's World Team Squash Championship in 2018 with the city of Dalian having been put forward.

The Dalian Squash Association are hoping that the city will become the first Chinese hosts of the biennial event, with their bid having been submitted during a three-day World Squash Federation (WSF) Ambassador Programme visit.

Under their proposal, competition would be held at the Xigang Stadium, a six-storey sports centre in the city, which boasts four all-glass squash courts.

Action would take place at the glass court at Olympia 66, the region’s largest shopping centre, before moving to the Dalian quayside at Dong Gang Square for the final stages of the tournament.

"The city has been a great supporter of squash and I would like to show my appreciation to the city by bringing the World Championship here,” said Wang Guo Guang, Dalian Squash Association secretary general.

"It would be a great milestone in my life and would make me very proud."

Should Dalian be selected to host the competition they would be only the second Asian city to stage the event, with Petaling Jaya in Malaysia having hosted it in 1996.

A total of 19 teams are due contest the 2016 World Squash Federation (WSF) Women's World Team Squash Championship are set to compete at this year's event in Paris, scheduled to start on November 27 and conclude on December 3.

England will begin as the defending champions, having beaten Malaysia 2-1 in the 2014 final at Niagara-on-the-Lake in Canada.

Dalian’s attempt to stage the next edition of the Championships has received the backing of the Chinese Squash Association, while the WSF have also welcomed the proposal.

“The Chinese and Dalian Squash Associations have already shown how strongly they not only organise events, but promote our sport,” said Andrew Shelley, the WSF chief executive.

“This coupled with the enthusiasm of the city authorities and facilities available - make this a superb option for WSF, and an exciting opportunity for the players and officials who will come to Dalian."