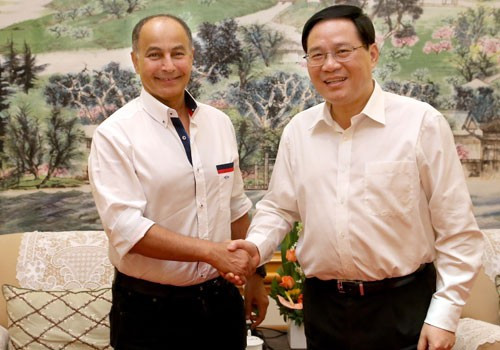 Ninety per cent of venues for the Hangzhou 2022 Asian Games have already been completed, the Olympic Council of Asia (OCA) have announced and predicted an "excellent" event in six years time.

The pair visited the Hangzhou Olympic Complex, which will host 22 sports during the Games, as well as the state-of-the-art Hangzhou Olympic Centre Stadium, due to host athletics and both the Opening and Closing Ceremonies.

A proposal to hold the Athletes' Village just three kilometres away from the Olympic Complex to minimise travel times was also approved.

They also supported the idea of turning the Olympic Complex’s underground parking area into a public and commercial area after the Asian Games.

“The OCA is very pleased with our first visit to Hangzhou," Al-Musallam, also a vice-president of the International Swimming Federation, said.

"From what we have seen during our trip we are in no doubt that the city will host an excellent event in 2022.

"The city benefits from already having a number of world-class facilities in place which will allow the Organising Committee to focus on making sure it deliver the very best possible event."

Hangzhou was chosen by acclamation to host the event at the OCA General Assembly in Ashgabat last year.

It will become the first Chinese host of the continent's showpiece event since Guangzhou 2010, and the third overall following Beijing 1990.

They also agreed with the principle of launching a "green, smart, economical and civilised” Games, based on the foundations set by Incheon 2014.

A next Hangzhou 2022 Coordination Committee meeting is due to take place in February 2017.

“The Asian Games is essential to the development of sport in Asia and is an excellent platform for the promotion of the Olympic Values," said Al-Musallam.

"We will continue to work closely with the organising committee to ensure that we provide the ultimate environment for Asian athletes to showcase their sporting excellence and inspire future generations.”

Jakarta is scheduled to host the next edition of the Asian Games in 2018.