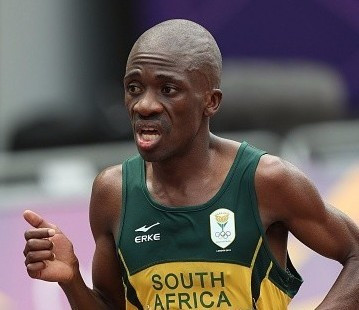 The 31-year-old Mokoka, twice winner of the Shanghai Marathon and three times a finalist at the World Championships, timed his challenge perfectly in a race paced for the most part by the heavily favoured Kenyan and Ethiopian contingents.

At the bell, Kenya’s highest-ranked runner present, Wilfred Kimitei, seemed well placed to finish the job for his country – but Mokoka produced a strong finish over the final 20 metres to secure his first big track title in 28min 02.97sec.

‘’It caught me off guard [the sprint], but I am happy that I worked on that and managed to win at the end of the day,’’ Mokoka said.

‘’So I am very happy with that because there is a huge improvement in my kick.’’

Mokoka became the first South African to win the 25-lap distance event which will boost his confidence ahead of this year's Olympic Games in Rio de Janeiro, where he plans to run the 5,000m and 10,000m.

‘’This will definitely boost my morale and the confidence, and I think if I can work on it, I believe I can finish even better,’’ he said.

‘’This is my first medal at the African Champs, it is very important for my career, I’ve been Kenyans and Ethiopians in the race.

‘’Going in the home straight I was just pumping and trying to pull the rope because when you go into the sprint you use your arms higher.’’

The Kenyans were not happy at being beaten.

“We should have won this,” said Kimitei.

“But it was not easy the conditions were hard and not good for us.

“This cold weather was something else, a different challenge.

“I know Mokoka -  he is a strong runner and when he challenged I knew I had to work hard to beat him.”

The 29-year-old Engelbrecht, the silver medallist at these Championships in Marrakech two years ago, claimed his first major title with a final effort of 20.00 metres which moved him up from the bronze to gold medal.

‘’I’ve dubbed myself ‘Mister Silver’ because at South African Championships it is silver, and at the African Games I won bronze, and a silver at African champs,’’ Engelbrecht said.

‘’It is a season’s best and it is nice to hit that distance.’’

African 100m record-holder Murielle Ahoure of the Ivory Coast, who leads this year’s world rankings with 10.78sec, made her intentions very clear as she reached the final with the fastest time of 11.08sec.

Botswana’s defending 400m champion Isaac Makwala breezed through his opening round in 46.14sec, while fellow countryman Nijel Amos, the London 2012 800m silver medallist, took it easy as he progressed in 1:50.19.