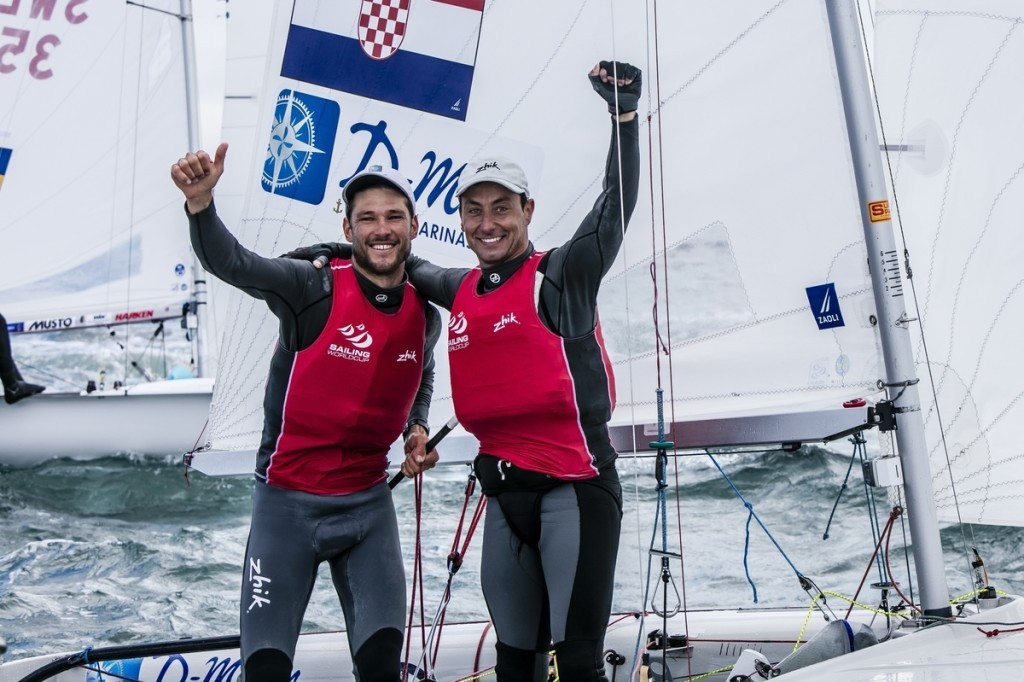 World champions Sime Fantela and Igor Marenic won the men’s 470 medal race to claim gold on the final day of action at the Sailing World Cup in Weymouth and Portland.

Great Britain's Luke Patience and Chris Grube, and Spain's Jordi Xammar and Joan Herp were tied for the overnight lead on 24 points with Fantela and Marenic six behind in third.

However, the Croatians grabbed the lead early on and never looked back as they overturned the deficit at the Weymouth and Portland National Sailing Academy - the venue used for London 2012.

"It feels great to win in Weymouth," said Fantela.

"We have never done it.

"When we were preparing for the London 2012 Olympics we were always third and fourth.

"It's great to finally win here."

Xammar and Herp finished level on 32 points with Fantela and Marenic, missing out on gold via countback.

Patience and Grube finished sixth in the race to complete the top three.

Their fellow Britons swept the women’s 470 podium with Hannah Mills and Saskia Clark successfully defending the title they won last year after finishing second in the medal race.

Sophie Weguelin and Eilidh McIntyre took the race victory to secure the runners-up spot ahead of Amy Seabright and Anna Carpenter.

Switzerland's Linda Fahrni and Maja Siegenthaler were tied with Mills and Clark at the top of the leaderboard before the medal race but a seventh-place finish meant they missed out via countback, ending up fourth overall.

Britain's Giles Scott continued his dominance in the Finn, sealing another gold medal with a second-place finish in the medal race.

London 2012 bronze medallist Jonathan Lobert of France won on the day by 15 seconds to secure silver, while Sweden’s Max Salminen completed the podium.

Training partners Nick Thompson and Elliot Hanson made it a British one-two in the laser fleet as Australia's Tom Burton was made to settle for bronze.

Burton had led for the most part of the week, but a ninth-place finish in the medal race, compared to back-to-back world champion Thompson's fourth and Hanson's third, saw him relegated to third.

Holding a 13-point advantage over her only rival, Bouwmeester's approach was a brutal, yet fair one, as she match raced her opponent to the back of the fleet.

At the front, China’s Lijia Xu took the medal race win and with it silver as De Kerangat dropped to third.

Germany’s Toni Wilhelm and China’s Peina Chen held on to their overnight leads in the men's and women's RS:X.

His main rival for gold, China’s Chunzhuang Liu, finished down in seventh enabling the German to comfortably wrap up the title.

In the women's RS:X, Chen's run of race wins was ended by Britain's Emma Wilson but the work done in the fleet races was enough for her to sail through in second and snap up gold.

Victory for Wilson ensured she held on to silver with fellow Briton Isobel Hamilton claiming bronze.

In the absence of New Zealand’s Peter Burling and Blair Tuke, compatriots Logan Dunning Beck and Jack Simpson stepped up to the mark in the 49er.

The pair had a solid advantage heading into the medal race and a sixth-place finish confirmed victory.

Britain’s Charlotte Dobson and Sophie Ainsworth held on to their gold medal in the 49erFX after New Zealand’s Alex Maloney and Molly Meech made a final assault on top spot.

The Kiwis came through 21 seconds clear of their rivals and then had to wait patiently to see where Dobson and Ainsworth finished.

The Britons followed in fourth place, which was enough to give them gold by a single point

Sweden’s Julia Gross and Cecilia Jonsson rounded off the podium.

Sixth in the medal race was enough for Britain’s Ben Saxton and Nicola Groves to win gold in the Nacra 17.

The pair held the lead heading into the final day and even though their main rivals to gold, Paul Kohlhoff and Carolina Werner of Germany, finished well ahead of them, the three consecutive race wins they picked up leading up to the medal race proved decisive.

Kohlhoff and Werner won't leave Weymouth and Portland too disheartened as their silver medal hands them the German Nacra 17 spot for this year’s Olympic Games in Rio de Janeiro.

Spain’s Fernando Echavarri and Tara Pacheco, gold medallists at the Sailing World Cup in Hyères earlier this year, won the medal race but it was not enough to make it onto the podium.

France’s Billy Besson and Marie Riou came through directly behind them, snapping up bronze.

The Sailing World Cup in Weymouth and Portland was the final opportunity for sailors to test themselves at an elite, official event before Rio 2016.

Britain were the biggest winners, claiming 13 medals on their home waters.

The next leg of the Sailing World Cup series is due to take place from September 19 to 25 in Qingdao in China.