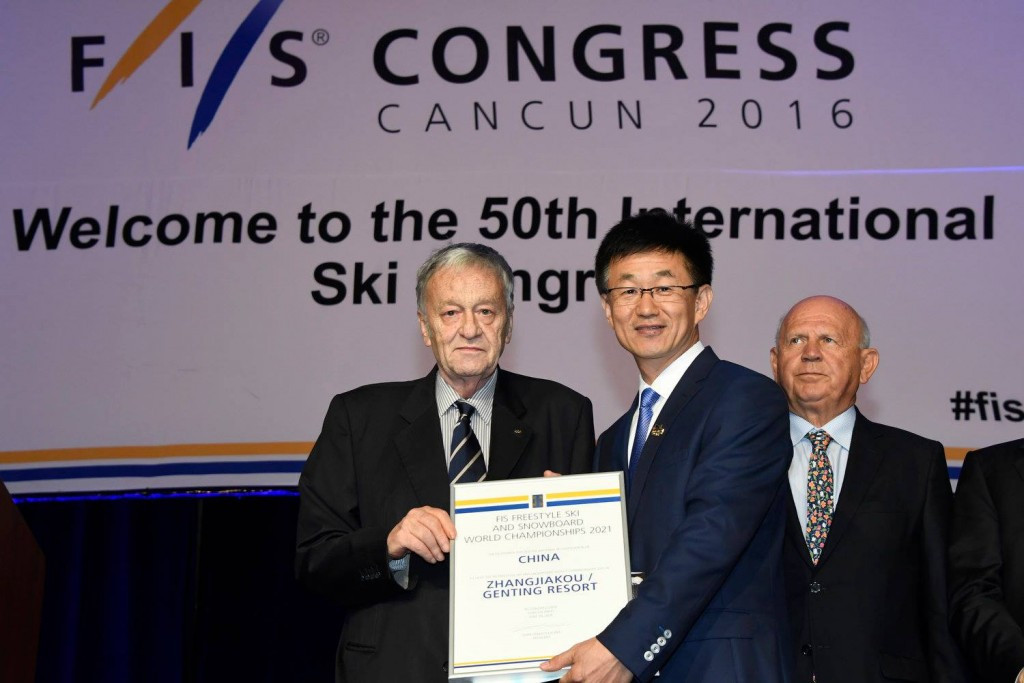 Zhangjiakou in China was today chosen to the host the 2021 Freestyle Ski and Snowboard World Championships, just a year before the venue is due to stage the same sports during the Winter Olympics in Beijing.

The Genting Resort, located nearly 200 kilometres northwest of the Chinese capital, was the only candidate and elected unanimously by the International Ski Federation (FIS) at its Council meeting in Cancun.

"Ideally, the World Championships will serve as the final test event for the Olympics, giving the organisers the best possible experience to prepare for the Games.

"It is also one of the key developing regions for freestyle skiing and snowboard, making it a perfect fit to develop and promote the sports strongly over the next five years."

Zhangjiakou is also due to stage ski jumping, biathlon and cross-country skiing during Beijing 2022.

The distance from Beijing itself has also raised questions, although China has approved a high speed railway to link it to the capital.

Cortina d’Ampezzo in Italy was unanimously elected as the host of the 2021 FIS Alpine Ski World Championships following unsuccessful bids for 2013, 2015, 2017 and 2019.

It will be the first time it has hosted the event since 1956 when it was staged as part of that year's Winter Olympics.

Cortina hosted the second edition of the FIS Alpine Ski World Championships in 1932.

They had also been awarded the 1941 World Championships, an event cancelled due to World War Two.

This time it was the only bidder for the event.

The Italian resort, located in the heart of the Dolomites, is a regular host of the ladies' Audi FIS Ski World Cup.

"They have outlined a series of detailed plans to develop the resort for the marquee event with a strong legacy for the future and we look forward to going there in 2021."

The 2021 FIS Nordic World Ski Championships will be hosted by Oberstdorf for the the third time.

The German town won with 11 votes against its competitors Trondheim in Norway, who got four, and Planica in Slovenia, with two.

Oberstdorf had previously staged the Championships in 1987 and 2005.

"We have an organiser with massive experience hosting both annual World Cup events and previous editions of the World Championships and there is not a doubt in my mind that they will do an excellent job in 2021."

Planica, however, did gain the consolation of being awarded the 2020 FIS Ski Flying World Championships for a seventh time.

They were the only bidder.

The resort had staged the first-ever Ski Flying World Championships in 1972.