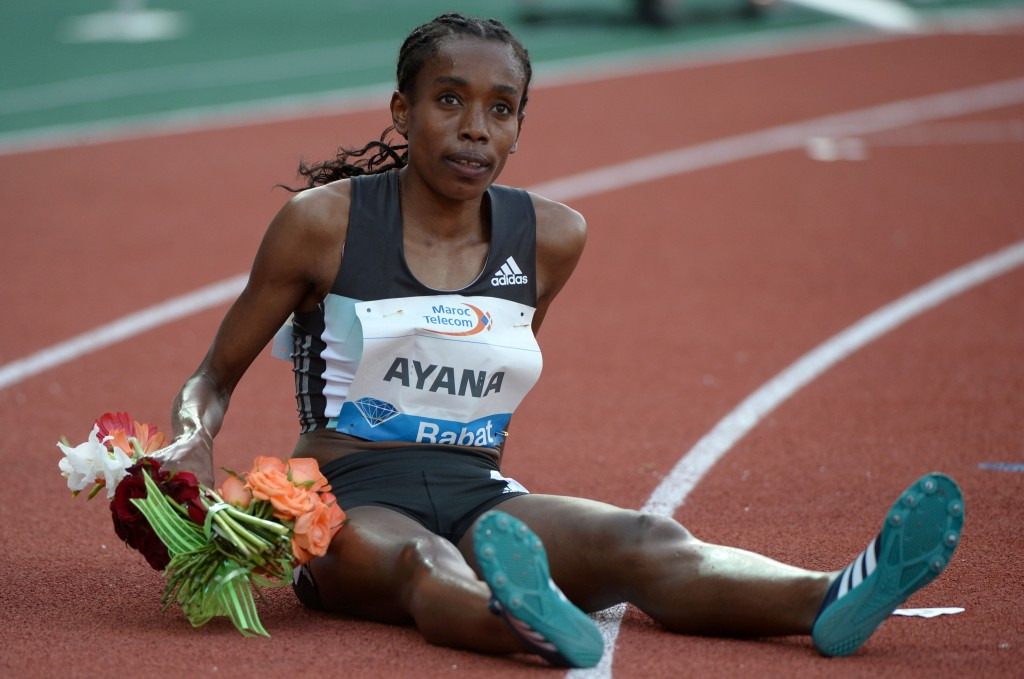 Almaz Ayana who missed out on the women’s world 5,000m record by just over five seconds last month in Rabat, came, agonisingly, even closer here in an International Association of Athletics Federations’ Diamond League meeting as she stopped the clock at 14min 12.59sec.

That was just 1.44 seconds off the mark set by her Ethiopian compatriot Tirunesh Dibaba eight years ago.

It was a meeting record.

It was a Diamond League record.

It was the fastest time run this year.

It was the second fastest time ever.

But, despite her dazed smile in the aftermath, it was not what Ayana wanted.

As the last pacer dropped away with seven laps remaining, Ayana was in a race of her own, more than half-a-lap clear.

And an increase in speed on the penultimate lap saw her clock 13:06.5 at the bell. Needed – a final lap of under 65 seconds.

She could not quite make it.

It was a measure of Ayana’s outstanding effort that Kenya’s Commonwealth Games champion and 2013 world silver medallist Mercy Cherono should register a personal best of 14:33.95 and still be adrift by almost the length of the final straight.

Meanwhile, Caster Semenya looks an unstoppable force as she moves closer and closer to Rio 2016.

The South African equalled her 2016 world lead of 1:56.64 in registering her third win in three Diamond League meetings.

After coasting along in the middle of the pack in a stadium where the message "We Want Roma" – a reference to the Italian capital’s bid for the 2024 Olympics and Paralympics -  the 2009 world champion moved up on the outside on the back straight.

“Now I need to be consistent, to maintain this shape until the Olympics,” said Semenya.

“My dream, my main goal is of course Olympic gold.

"I am very pleased with the time.”

Since 2012, Caterine Ibarguen has turned the triple jump into a discipline of four elements - hop, step, jump, win.

Last beaten in the 2012 Olympic final in London, she has collected two world titles since in a winning run that now extends to 34 competitions.

It is not that the Colombian has it easy.

On this occasion she was headed after two rounds by the last woman to beat her, the Olympic champion Olga Rypakova of Kazakhstan, who reached 14.51 metres.

It was good – but not good enough, as Ibarguen responded in the next round with 14.64m, extending her lead with an exuberantly celebrated final effort of 14.78m.

“I am very satisfied,” said Ibarguen.

“I had to fight in the third jump to take the victory.

"I am focused on Olympics – I won a silver medal in London and this year I will give anything to take the gold.”

Greg Rutherford – pause for breath –  Olympic, world, European and Commonwealth champion, rose to the challenge once again to maintain his unbeaten start to the season, which indeed he described the day before as his best ever start.

The ginger-haired Briton won the competition with his second effort of 8.31m, his best of the season, finishing clear of Marquise Goodwin of the United States, who had a best of 8.19m, and Australia’s Fabrice Lapierre, who reached 8.18m.

“That was not bad,” said Rutherford.

“A hugely important step towards the European Championships and the Olympics.”

Webb had a profitable night as he doubled up in the non-Diamond Race event of the men’s 100m, clocking a personal best of 9.94 in mounting an unexpectedly prolonged challenge to fellow American an world silver medallist Justin Gatlin, who won in a season’s best of 9.93.

Decibel levels soared in this Stadium which hosted the 1960 Olympics as Italy’s world indoor high jump champion Gianmarco Tamberi, in his first appearance at the Golden Gala Pietro Mennea meeting, encouraged the crowd to help him.

In the end, however, the 24-year-old had to settle for third place with 2.30m as the maximum points total went to Ukraine’s 2013 world champion Bohdan Bondarenko, the winner on countback.