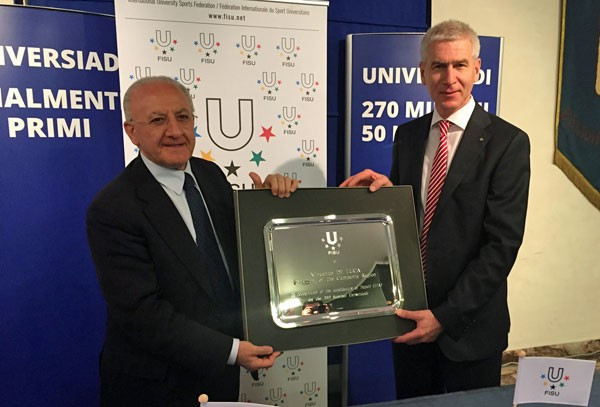 Naples has been announced as hosts of the 2019 Summer Universiade following a vote by the International University Sports Federation (FISU).

The Italian city had been the only candidate in a reopened bidding process after Brasilia withdrew as hosts of the event in January 2015, with the Brazilian capital having been unable to meet financial commitments.

A Memorandum of Understanding (MoU) had been signed between Vincenzo de Luca, President of the Campania Region, which includes Naples, and FISU secretary general Eric Saintrond in October to formally declare them as a candidate.

FISU stated that an Evaluation Committee, chaired by vice-president Leonz Eder, provided a positive report following a four-day visit to Naples which took place from April 25 to 29.

After receiving 15 votes in favour of awarding the 2019 Summer Universiade to Naples by the Executive Committee, FISU President Oleg Matytsin confirmed the city and the Region of Campania as the hosts.

FISU have claimed that the event will serve as a “fantastic opportunity” to celebrate the 70th anniversary of the body, which organises and governs worldwide competitions for student athletes.

“With the full involvement of the Campania Region and under the leadership of its President, Vincenzo De Luca, the Universiade in the Campania Region will be a fantastic project for the young generations, the local community and the entire country,” FISU said in a statement.

Naples' concept was praised by the organisation, who believe it will provide a legacy to the local community and boost the development of youth and sport in a region with a large student community.

Italian Prime Minister Matteo Renzi and the Central Government are said to be supporting Naples’ project, along with universities and the Italian National Olympic Committee.

The southern city is best-known in a sporting sense for Napoli Football Club, but, if it was successful, it would add to a rich heritage of Italian hosts for Universiade events.