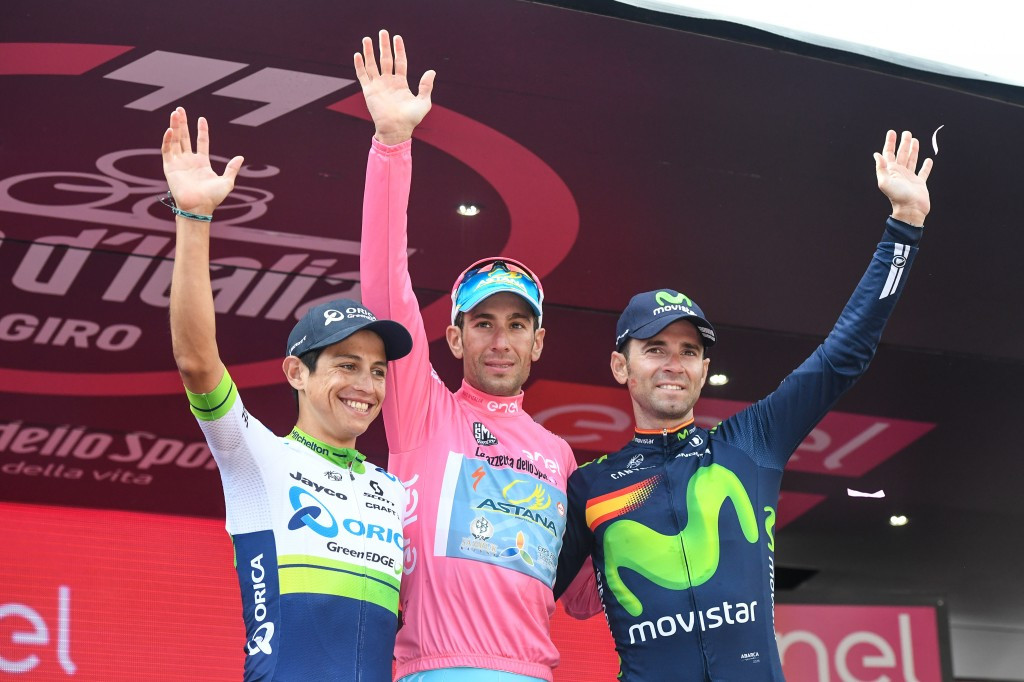 Italy’s Vincenzo Nibali celebrated earning his second Giro d’Italia title after finishing safely in the peloton on the final stage of the 99th edition of the International Cycling Union Grand Tour.

The 31-year-old began the 163 kilometre flat stage from Cuneo to Torino with a 52 second advantage over Colombia’s Esteban Chaves, but was assured of winning the general classification when the race organisers neutralised the standings today as a result of heavy rain.

A two-man breakaway of Maarten Tjallingii and Jos Van Emden, both of The Netherlands, attempted to foil the sprinters by claiming a surprise stage win.

However the duo were caught within the final six kilometres of the race, with Belgium’s Sean de Bie then launching a late move.

The sprinters, though, were not to be denied the chance of a final stage victory, with Giacomo Nizzolo crossing the line ahead of Germany’s Nikias Arndt in a time of three hours, 48min and 18sec.

Nizzolo, who had yet to earn a Giro d’Italia stage win in his career but boasts nine second places to his name, was deemed by the race jury to have deviated from his racing line and obstructed fellow Italian Sacha Modolo.

The jury opted to relegate the Trek-Segafredo rider, leaving Arndt as the final stage winner.

Nibali was able to celebrate claiming the overall title, having previously done so in 2013, with the final standings seeing him end 52 seconds ahead of Chaves and 1:17 clear of Spain’s Alejandro Valverde.

"It's a beautiful emotion, today I win my second Giro d'Italia, and I’m speechless,” said Nibali.

“The crowd on the final circuit was enormous and showed me great affection.

“My family is here so I've been able to hug everyone.

“At the beginning of the race we've had a bit of rain but with the nice weather at the end, my joy is complete, I've loved that moment."

Nizzolo claimed the points classification, despite his final stage relegation, while Spain’s Mikel Nieve earned the King of the Mountains title.