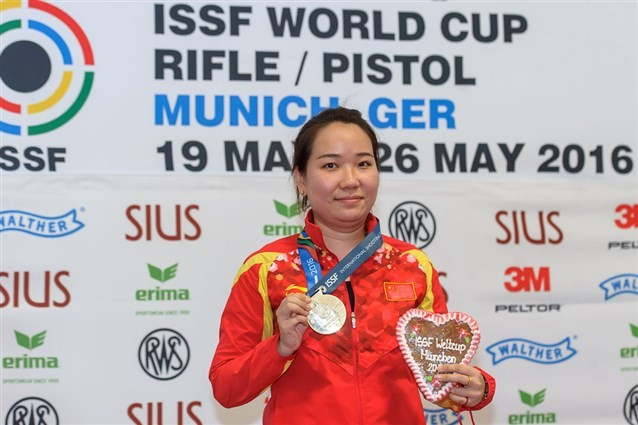 World champion and world number one Zhang Jingjing was again in fine form as she claimed 25 metre pistol gold at the International Shooting Sport Federation (ISSF) Rifle and Pistol World Cup in Munich.

The 27-year-old Chinese won the first stage of the World Cup season in Bangkok before claiming silver at the Olympic test event in Rio de Janeiro, and maintained her excellent shooting in the German city.

She topped the semi-final with 21 hits, with five shooters going into a shoot-off to advance after finishing six hits behind her.

In the gold medal match, Zhang faced Athens 2004 Olympic champion Olena Kostevych, and blew away the Ukrainian by seven hits to one.

All eyes will now be on Zhang, who is also the Asian champion, in the run-up to Rio 2016 after this dominant performance.

In the men's 50m air pistol event, Spain's Pablo Carrera won gold, his first at World Cup level, with a score of 193.9 points.

He beat two former Olympic champions into the minor medals, with China's Beijing 2008 10m pistol gold medallist Pang Wei taking silver with 190.3 after closing his match with a frustrating score of 7.2.

South Korea's Jin Jongoh, who won 50m pistol Olympic gold in Beijing and at London 2012, and then the 10m air pistol title in the British capital, claimed bronze.

"Finally I made it, after ten years," Carrera said.

“Before the last two shots, I had less than one point of advantage on my follower, and I have to admit that I was a bit nervous.

“It has not been easy.

"I was up against Pang Wai and Jin Jongoh, two Olympic Champions, two of the best shooters of the world.

"Mental strength is very important in this sport: you’ve got to believe in yourself.

“I am obviously looking forward to the Olympic Games, and I hope I will be able to shoot as good as I did today in Rio.”