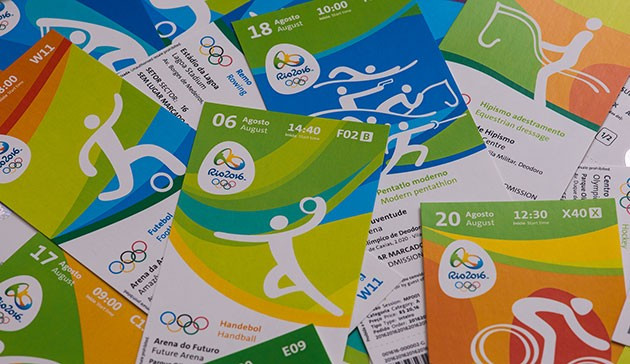 Rio 2016 claim more than two thirds of Olympic tickets have now been sold following the launching of the process to distribute the four million bought so far to their buyers.

Colourful special commemorative tickets are due to feature a unique logo for each Olympic and Paralympic sport, it has been announced, all incorporating the colourful "Look of the Games".

They will be on sale until Thursday (May 26) after which tickets will feature a simple design.

“The commemorative tickets were thought of as a teaser, to show a glimpse of what the supporters can expect in each of the arenas,” said Rio 2016 brand director Beth Lula.

"Work on designing the tickets began in December 2014 and consulted the directors of the ceremonies.

"We wanted to capture the spirit of the event.

"From the start, we had a commitment to leave a legacy with our messages.”

This comes as organisers attempt to raise the profile of the Games among the Brazilian nation at a time of political and economic woe.

Organisers insist that four million of the six million available have now been sold, with this percentage a marked increase on the 50 per cent level announced in March.

This follows the selling of fresh batches which had been kept in reserve.

But two million tickets remain on sale and every Thursday a new batch of tickets will go on sale in the host nation, Rio 2016 claim, including for some of the "most sought-after events".

This is set to include preliminary round action in basketball, volleyball and beach volleyball.

Sales for the Paralympics have been far lower, but organisers claim to be confident they will continue to rise as excitement levels grow.

“This was one of the biggest challenges - the question of tickets and the story of another Games,” said Rio 2016 President Carlos Nuzman about the design.

“For these first Games in South America, we also wanted to do something different.”

Rio 2016 have also implemented measures to secure the tickets against fraud and resale, they announced, underlining that fans should only buy their tickets from authorised sources.

“Our aim to ensure tickets reach the right hands for a fair and just price,” said ticketing director Donovan Ferreti.