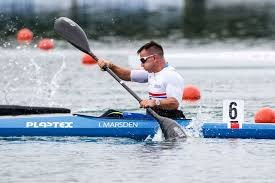 Marsden, twice a World Championships silver medallist, clocked a time of 51.090sec to finish in front of South Africa’s Graham Paull, with Fernandes coming through to take third.

The Brazilian is a multiple world champion and is expected to clash with defending gold medallist and compatriot Luis Carlos Cardoso Da Silva in tomorrow’s final.

China's Maosan Xie produced the quickest time in the women’s KL1 200m, crossing the line in 59.293, though she will face a tough ask if she is to end the event with gold as she will go up against Britain’s Jeanette Chippington, a four-time world champion since switching from swimming, and Edina Müller of Germany.

Dejan Fabcic of Slovenia pipped Ukraine’s Maykola Syniuk to take victory in the second men’s KL2 200m event as he finished in 45.264, with his closest rival narrowly adrift of the winning time in 45.382.

Both athletes registered quicker times than the victor in the opening semi-final, won by Italy’s Federico Mancarella in 45.670.

Spain’s Javier Reja, gold medallist in 2013, booked his place in the finale of the event by clocking 47.354 in the race where the Italian proved too strong.

Wang Daquin of China kept her pursuit of the women’s KL2 200m world title alive as she reigned supreme in her semi-final in 54.380.

The Chinese canoeist will take on Britain’s Emma Wiggs and Canadian star Christine Gauthier, both former world champions, in what looks a hotly-contested final.

Brazil remain on course of a decent haul of medals at the event in Duisburg as Caio Carvalho De Ribeiro was one of the qualifiers in the men’s KL3 200m.

Ribeiro won the second semi-final in 40.571 to join the likes of Germany’s Tom Kierey, who was second in the opening race in the discipline behind Ukraine’s Serhii Yemelianov’s 39.540.

Brazil's Christina Mari Santilli managed to edge Kelly Allen of the United States in the women’s KL3 200m in a thrilling encounter by clocking 53.112, with both athletes ensuring they will compete for gold tomorrow.

The ICF Paracanoe World Championships conclude with finals across all categories tomorrow.