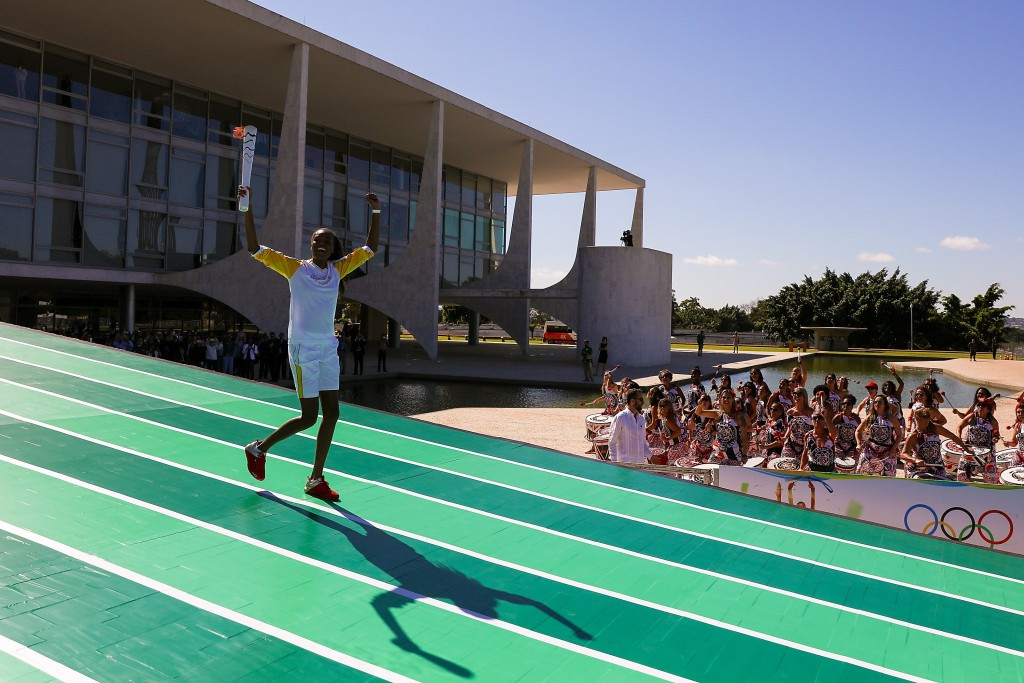 The journey of the Olympic flame around Brazil was always likely to turn into one giant carnival, and it has certainly been so in the first 14 days.

Brazilian President Dilma Rousseff was all smiles as she lit a Torch from the cauldron to launch the domestic Relay, but to slightly alter the old adage, a fortnight is a long time in politics.

Her impeachment seems inevitable as the political crisis deepens.

She would have become only the fifth woman to formally open an Olympic Games, but now it seems that Torch moment might have been her last Olympic act.

Meanwhile, the Torch Relay has already become an unstoppable phenomenon, greeted by a sea of smiling faces, music, dance and a real sense of local pride.

Organisers were determined it would start with a flourish.

Later in the day Joachim Cruz, the man who stopped Seb Coe winning an Olympic 800 metre title in 1984, proved an equally popular bearer.

Manoel Costa, a military police officer, abseiled with the flame down the Juscelino Kubitschek Bridge and fireman Haudson Alves did the same at the Mane Garrincha Stadium before handing it to footballer Lucio.

A refugee from the fighting in Syria, her family have made a new life in São Paulo.

‘’I never imagined this could happen," she said.

‘’I love the Brazilian people, I feel Brazilian myself."

In the days that followed it travelled through world heritage sites and cultural centres.

In Itabira, schoolchildren paid tribute to poet Carlos Drummond de Andrade and wore costume from his childhood in the early 20th century.

As their teacher Larissa Quintao carried the Torch, the children released balloons in celebration, their own idea.

In Uberaba, the Torch was carried by inventor Alfredo Moser, who created a simple lamp using a plastic bottle, water and bleach to refract sunlight.

Then there was dentist Lucio Monteiro.

Before carrying the Rio 2016 flame himself, he followed the Relay from Corumba de Goias wearing a gigantic Torch costume.

’’If I could, I would follow the Relay right across Brazil," he said.

Others had fought their own personal demons to carry the flame.

Ademar Caixeta found solace from a life of drug and alcohol addiction in running and founded a local running club.

Ninety-year-old bishop Don Lelis Lara took the Torch in Coronel Fabriciano and revealed his secret for a long athletic life.

‘’I try to contemplate nature, listen to good music, meditate on god, live a convivial life with others and eat healthily,’’ he said

The Olympic flame had already flown twice by helicopter when Moises Sodre, a paragliding instructor, carried it high above Pico do Ibiturana on a hang glider.

‘We had this idea and we are doing it because we love paragliding,‘’ he said.

‘’Doing it with 29 friends by my side is the icing on the cake."

Brazil’s success in volleyball has been well represented from the moment double gold medallist Fabiana Claudino took the first Torch in Brasilia.

‘’It was an honour to step onto the podium in Barcelona with Itabira in my heart and today I am once again representing the people of Itabira,’’ he said.

Another volleyball champion, Sheilla Castro, is determined her nation will make it a hat-trick of gold medals in 2016.

‘’We’ve got to make the most of the fact that we’re on home ground,’’ she said as she carried the flame through her home town of Belo Horizonte.

This will be one of the first cities to witness Olympic competition in 2016, when the United States meet New Zealand in women’s football on August 3.

In the 300-year-old town of San Joao del Rei, bells chimed and traditional sand and sawdust carpets were decorated with the symbols of the Games.

In Barbacena, the ‘Town of Roses’, petals were scattered across the square.

It was an echo of a previous Latin American Torch Relay to Mexico in 1968, when the pathway for Torchbearers was decorated in similar fashion.

The flame has even briefly crossed into the home state of the Olympic city.

Itaperuna, in the state of Rio de Janeiro, is some 320 kilometres north-east of Rio.

The flame returns to the state a week before the Games.