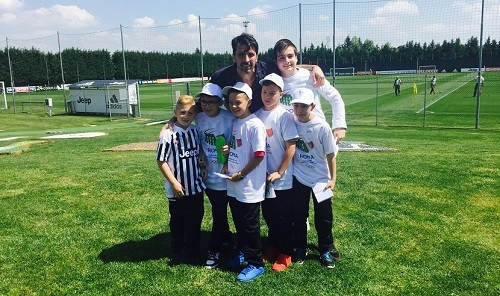 Italian football goalkeeper Gianluigi Buffon has featured in the latest promotional video for the Rome 2024 Olympic and Paralympic bid.

The 38-year-old, a World Cup winner in 2006, answered a series of questions from six young athletes.

The video is one of a collection of interviews which will be released by the Italian capital as they seek to promote their bid.

Each of the videos features athletes being asked questions by children, with Rome 2024 claiming this is a “metaphorical handover” in which champions share their experiences to help the children grow as athletes.

Those asking the questions could one day compete at the Rome Games, it is hoped.

"The new generations are at the heart of the Rome 2024 Olympic project, starting from them we can build the future together," a statement said.

Andrea Bargnani, a basketball player who played for the Brooklyn Nets, is another athlete to have featured.

Buffon, currently the captain of Juventus, is regarded as one of the world's best goalkeepers of recent times.

He was asked about Italy's football squad for the upcoming European Championships in France, and in particular if veteran striker Francesco Totti should be selected.

The stopper was also asked about Antonio Conte - the manager of Italy who will leave at the end of the tournament to take charge of English Premier League side Chelsea.

Budapest, Los Angeles and Paris are also bidding for the 2024 Olympics and Paralympics.

A decision will be made by the International Olympic Committee at their Session next year, in Peru's capital Lima.