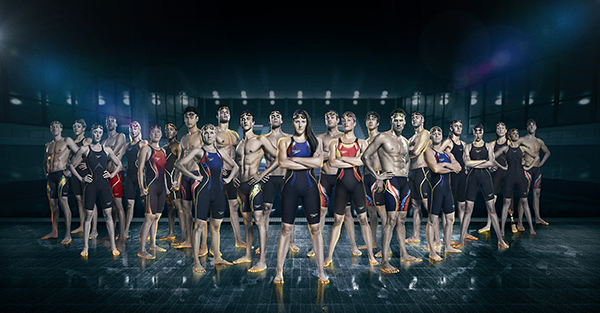 Speedo has unveiled its latest line-up of federation swim suits which sponsored athletes will wear during Rio 2016 and other events this season.

The special edition versions of suit will be worn by Speedo-sponsored swimmers and swim teams from the United States, Australia, China, Spain, Japan, Canada and Israel.

The Speedo Fastskin LZR Racer suits have been designed in an attempt to create a powerful image with shading and contrast around muscle definition.

For female swimmers, this is combined with a "more feminine feel through a shaping aspect which is done through tones of colour to create shadows and highlights".

"There is a significant psychological benefit for every athlete in feeling and looking fast, as well as actually being fast," said Jamie Cornforth, vice-president of product and marketing at Speedo International.

"The Speedo federation suits look so eye-catching, dynamic and powerful that our athletes will no doubt hit the blocks with confidence, empowering them to look, feel and perform their best."

Arena, another brand of swimwear, is also releasing a new swimsuit ahead of Rio 2016 - the POWERSKIN Carbon-Ultra.

Inspired by Arena’s work with Innovia Technology - a global consultancy focused on breakthrough innovation - the suit incorporates an outer "carbon cage" shell aimed at maximising hydrodynamics with a revolutionary inner "Ultra-Link System" in an effort to optimise the athlete’s physiology.

Innovia Technology, which is headquartered in Cambridge in England, has been working with Arena since 2008, providing theoretical understanding into how a swimsuit can be designed to maximise the effectiveness of the swimmer’s actions in the water.

At the 2015 World Championships in Kazan, a further four world records tumbled and 24 gold medals were gained.

"To support the breakthrough design, we integrated deep knowledge of the physiology and mechanics of swimming with insights into apparel development," said Andy Milton, innovation consultant at Innovia Technology.

"As a result, we were able to provide arena with options for the design of the suit, including guidelines for fabric construction, and also advice for communicating the benefits of the technology effectively to professionals."